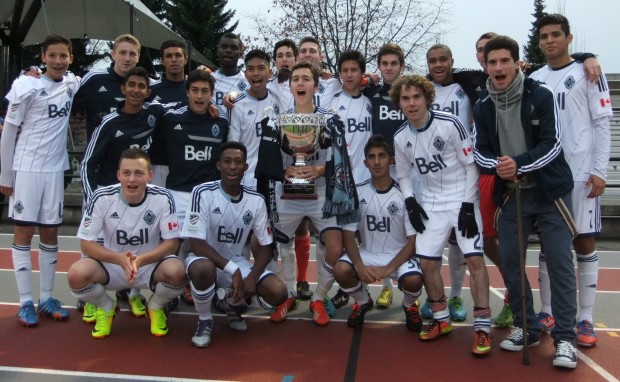 Residency Week continues here on AFTN with the first part of our popular “Ones To Watch” series.

One of the hot topics amongst fans at Residency games is always which players do we think can go on and become professional footballers, either with the Whitecaps MLS squad or somewhere else in the world.

The last two years we’ve put together a countdown of who we felt were the top prospects in the Whitecaps Residency program and how we would rank them, looking at only the then current U16s and U18s (who had not already signed a MLS contract).
.

We’ve tweaked it a little this year, bringing you two separate Top Five ‘Ones To Watch’ countdowns, one for each of the U16 and U18 age groups, along with a special note to those just bubbling under and missing the cut.

Part one today takes a look at the players who were part of the U16 team that bounced back this season to make the playoffs after missing them last season in a rebuilding year. The team finished first in their division and it was a complete team effort which really made it hard to narrow the top places.

As per every year, the following rankings are a snapshot of where the players are in their development combined with the potential they show to develop into professional footballers and taking current age into account.

Because potential is so hard to predict, it is not an even measurable with the player’s current status. We feel there isn’t a reason any of the lower ranked or unranked players couldn’t develop into future professionals.

The rankings are put together after getting input from a number of sources. Included in this review is an independent scout who has seen the Residency players in action on a number of occasions. 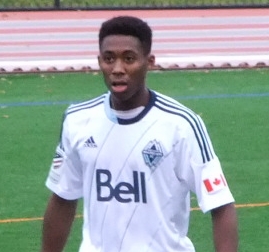 OVERVIEW: In his second full season with the U16s, Cuthbert continued to make progress at the rightback position. Has a very solid two way game and delivers an excellent ball into the box from the wide areas and was recently called to the U18 camp for Canada. The Caps may finally have their homegrown prospect in this position.

OUTLOOK: Cuthbert will move up to the U18s where he will look to establish himself as the everyday right back.

SCOUT’S TAKE: Another player who has progressed very well in the 2013-14 season. A pacey, attack oriented full back who can also tackle and defend with an equal skill set. Athletically gifted, Cuthbert also has a good mentality and is committed in a tackle and in one v one defending. Tactical awareness and his heading duels are areas he can improve. Cuthbert’s next step is to be an influence in games at the 18s level, and to continue to advance his overall development, but from everything that has been seen from him this year, all is pointing to him becoming a major player on the team. 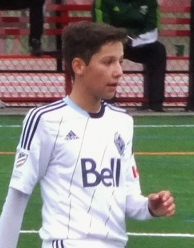 OVERVIEW: The holding midfielder continues his rise through the ranks of the residency program with another impressive season. Norman’s excellent blend of technical ability and toughness will make him someone to watch over the next few years.

OUTLOOK: While still eligible for the U16 program there may be a chance that Norman will advanced to the next level. If he does remain at the same level then expect him to take on a leadership role with the team.

SCOUT’S TAKE: Norman has continued his development as one of the strongest holding midfielders for the Whitecaps, playing his best soccer in the last four months. He has a skill set typical to many great holding midfielders around the world – excellent tactical awareness, good link between defenders and attackers, and an ability to break up the opponents attack either with dispossessions or strong tackles. He has an exceptional mentality, football IQ, and work rate in addition a strong desire to become a professional player. Norman has a lot of upside to be a top player, but he will have to improve his strength and pace, as well as discipline in not taking too many yellow cards in the wrong areas or at the wrong time.

OVERVIEW: A very impressive season for the converted winger who showed attacking flair from both sides of the backline. He contributed with scoring and both of his goals this season were highlight reel types where he went through a number of players to score.

OUTLOOK: As a player still learning his position, Chung will most likely remain at the level but there is a chance he could see some U18 action during the season.

SCOUT’S TAKE: Coming out season for Chung as he displayed his exceptional attacking skills. He is very good at getting involved going forward and is particularly good at running at defenders, getting good service into strikers, and when presented with the opportunity, finishing his chances. He is also a good one on one defender. There is lots of upside for Chung. One of the younger players in the program, he will need to work on his mentality, tackling ability, and challenges in heading situations to take his game to the next progression.

OVERVIEW: Mostly playing in a centrally attacking role for the U16s, Gardner is one of the most technically gifted players in the program which has seen him get called up by the U16 national team. In addition to his playmaking ability, centrally or on the wing, he also has the capability of contributing with a timely goal.

OUTLOOK: Similar to Norman, Gardner could go up to the U18s or remain at the current level and this will depend on where the coaches feel he can further best develop his skills.

SCOUT’S TAKE: One of, if not the best dribblers in the Residency Program. His dribbling and good passing skill set, allows him to score or set up a team mate for a goal completely out of nothing. He is best at the number 10 position, but he also has an impact on the game from playing out wide or as a box to box midfielder. Gardner is also very athletic, particularly his endurance and ability to perform at a high level of fitness for the entire match. Overall a very good prospect, but to continue his progress, he will need to become stronger mentality wise around decisions on when to dribble, pass, and shoot in addition to improving his defending side of the game in order to evolve his game to the levels expected of him. 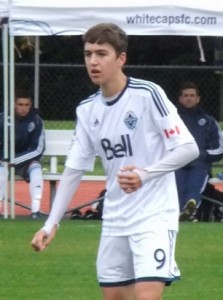 OVERVIEW: Starting his first season as the regular striker, Zanatta experienced a breakthrough season scoring 21 times. He even impressed in a couple of opportunities with the U18s when the team was missing players due to international callups.

OUTLOOK: Zanatta will be moving up to the U18 level and will take on the starting striker position as he looks to continue his goal scoring prowess.

SCOUT’S TAKE: A player who has emerged after a tough year at U16 in 2012-13, to be a sensation at the U16 and U18 levels in the 2013-14 season. Zanatta has a rare football IQ and innate ability to be in the right place at the right time to score goals with either foot, off a dribble, from short or long range, with his head, or from set pieces. This has helped him to be one of the top scorers in all of the USSDA. All strikers need to score, but Zanatta brings so much more to the game. He has an excellent passing sense, sees the game well, and is learning to play as an out and out striker. To go to the next level, Dario needs to work on his ‘back to goal game’, ability to bring teammates into the game, athleticism. This will be a big year for the young striker to see if he can push on and get training opportunities with the first team.

There were a number of players for one reason or another that didn’t make the Top 5 but definitely deserve a mention. Any one of these players have the ability to become future professionals in soccer.

There were a few players that were very close to cracking into the top 5 including midfielder Francisco Saporito, who brings his high work rate to the midfield in addition to his skill. Another player who could have easily been in one of the five spots is Terran Campbell, whose size and athleticism makes him a handful to defend.

The Caps have had great success in developing keepers and the next one could be Aidan Aylward, who split duties this year with the U16s. Because the team was very deep, winger Daniel Sagno didn’t see as much playing time but he was a threat the majority of the time he was on the pitch, scoring 8 goals.

Ottawa native Vana Markarian joined the program midway through the season while two others, striker Aymar Sigue and defender Eric de Graaf missed parts of the season due to injury. Sigue saw time with both the U16s and U18s and scored 10 goals. He is already looking towards his college career.

So that concludes our look at the “Ones To Watch” in the U16s, we’ll be back with out U18 round-up at the weekend.