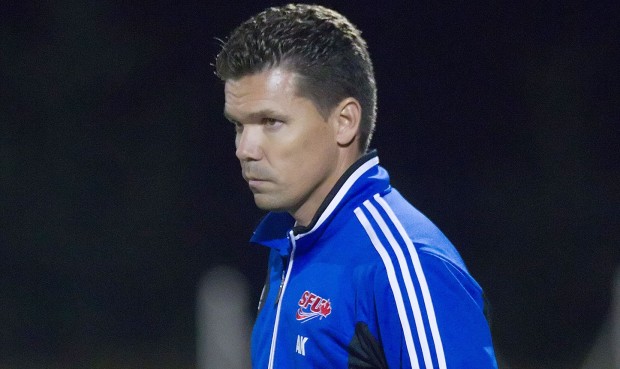 When the SFU Clan were accepted into the NCAA in 2009 it caused some ire amongst some here in Canada.

Was it the best move for the program? Was it beneficial to the development of Canadian athletes? Was it detrimental to the Canadian school system? Just why did they make the switch? How competitive is their current level of play?

These were all questions asked then and are common discussion points in the comments section of pretty much every SFU article we’ve run.

In the first part of a very open, honest and frank two part interview with Clan Head Coach Alan Koch, we discuss the decision for SFU to go down the NCAA route, the benefits to the program and both the good and bad issues that arise from being a Canadian school in the American college system, including having to play home matches on the road…

AFTN: We’ve been covering SFU all season and every time we run an article there’s always a lot of debate as to why the Clan went down the NCAA route and not CIS and what that has meant to the Canadian collegiate system. Why did SFU make that decision?

Alan Koch: SFU made the switch for two reasons.

Finances. Instead of going east-west, we can travel north-south. It’s closer for us to get to Seattle, Portland, all the different areas in the Pacific North-West than it is for us to fly to Alberta, Manitoba, Saskatchewan and all that stuff. So finances played a big part in it.

Plus being able to compete at the elite level.

Division 2 is far superior across the board than the CIS. The top 5 schools in the CIS are good. UBC won it this year and they have a very good team this year.

It’s varying levels. UBC could be good this year and they could be average next year. York back east occasionally have a very good team. They can compete at the elite level.

But consistently, the CIS is not as good as the NCAA Division 2 and where there’s only five quality teams in the entire CIS, out of the 50, we’ll probably have a good 25 to 30 quality teams out of our 200 in our League.

The CIS is a good level too, and I don’t say that in a disrespectful way, but there’s only a handful of good teams and when you only play one or two good games a year, it’s very very hard for your group of players to get better.

The couple of teams at the bottom of our Conference this year weren’t that good, the 5-0’s, that type of deal. But our top games in the GNAC are absolute battles. Seattle Pacific, Montana State, and surprising this year, Northwest Nazarene, were very tough matches.

So for anyone who hasn’t seen any of your matches this year, how would you describe the overall standard of NCAA Division 2?

Tough question to answer. Across the board in NCAA Division 2, from team 1 to team 100, and there’s roughly 200 teams, there’s not that much of a difference in the different groups.

The bottom teams in the 200 are a little bit of a drop off, but I’d probably say that’s only the last 20 to 30 teams. From team 170 all the way up to probably team 10, there’s a good, solid group of core, quality university teams. And then I think the top ten are a step above and that top ten can go and play with the elite in NCAA Division 1, which the elite in NCAA Division 1 is not that far away from the MLS level.

And I think we’re in that top ten.

We’re in the ‘Final Four’, we’ve been ranked in the top ten and I think that we’ve proven that we deserve to be up there. We’ve played against NCAA Division 1 teams and beaten them, so it’s a very high standard to be honest.

As someone new to watching the college game, and I’m sure a lot of our readers are in the same boat, I don’t really fully get what the differences are between Division 1 and Division 2. Can SFU ever get up to NCAA Division 1?

You’ve already touched on previous games, but how competitive would you feel if SFU were up against some Division 1 schools?

I think we’d probably be in the top 50. Where in the top 50 we’d be in Division 1, who knows? Until you’re playing teams like that week in and week out, it’s hard to gauge. On a good day we could be right at the top. On a bad day, we could be down towards the 40s, 50s, that type of position.

The worst thing, in my opinion, is I don’t know why them called them Division 1, Division 2, Division 3, because there’s no promotion or relegation. Your school decides which League to go in to and a lot of it has to do with how many sports you decide to sponsor, the Conferences you can get in to. It’s not like regular football where you can go down. This is your League, that’s where you play in.

And a lot to do with enrolment too?

When we spoke to former Whitecaps Residency coach Richard Grootscholten earlier this year, he told us that when he travelled down south with the Academy at the beginning of the last year, the American teams always felt like it was a huge game because they were playing the Canadian team. Have you found that as well the last couple of years, especially now with the tournament, that people are revved up a little more against you guys because you’re the Canadian team and they want to knock you off?

You go down and there’s a lot of little things that can irk you at times. A lot of places we play are great. They have the Canadian flag up, they’re singing the Canadian anthem, but there’s places they’re just not used to having it.

NCAA is an American league. It’s kind of like we’re treated as somewhat of an oddity on that League. We use it to motivate our players. We’re representing Canada in this league.

I wouldn’t say there’s animosity. I’d say it’s a friendly rivalry, but there are times when it definitely becomes us against them, that type of mentality, which is pretty much exactly the same as what Richard probably experienced with the Residency team down in the Academy league.

Now when you talk about the adversities of being a Canadian team in an American league, the biggest one has to be the fact that you’ve had to play every postseason game on the road. Has it been frustrating that you didn’t get the chance to host the home games your play had earned, or was that a situation that you knew was going to happen?

We worked all season long to be number one or number two in our region so we could get one, the first round bye in the national tournament, but two, get the right to host.

When that was taken away from us pretty close to the end of the season, it was bloody frustrating to be honest, but now that it’s happened, we’ve dealt with it and the players are moving forward. We’ve embraced it and it’s something that we’re using to kind of fuel the fire a little bit.

Hey, we have to play on the road, which we have to, we’re going to deal with it. We’re going to go out there and make sure that we take care of business.

Our wheels nearly came off against Incarnate Word in the ‘Elite Eight’ and I think that was just the sheer fatigue of the travel.

Did you have a choice of San Francisco as your home venue? Was Bellingham or Seattle an option just to have it that little bit closer to home?

Yeah we did. We were given, I think it was ten days before the end of the season. We were told that we wouldn’t be able to host and our athletic director did a good job of fighting it and really trying to appeal to NCAA ‘Why?” type of deal.

But they said that was the decision we made for this year, we’re going to have to deal with it and then we started exploring all options.

We even tried to get Jeld-Wen, the Portland Timbers facility, that wasn’t available, I think there was an American football match being played down there that day.

The closest field turf field and the best facility available was actually in the Bay area, and that’s why we had to put a bid together as that was where we were going to host it.

The pitch was great. It was exactly the same field turf that we have here. Great stadium. The Bay area climate is closer to here than us having to go and play in southern California or anywhere else like that, so that’s why that bid was put in.

NCAA approved it and they covered the costs. Did they cover the costs because they felt a bit bad that they wouldn’t let us host? Maybe.

I think it’s a bit of a teething problem right now for them, having a Canadian team in the league and then they probably weren’t expecting us to be as successful as we have been too.

It’s something that the Whitecaps Residency have faced in the USSDA. Having to play some home games in Bellingham as all their opposition can’t all cross the border

This is the decision NCAA made this year. I guess we’ll have to deal with it moving forward.

It will certainly be interesting to see how the NCAA deal with the situation if/when it arises next season.

We’ll wrap up our chat with Alan there for the moment, but tomorrow we’ll continue it and get his thoughts on the season so far and look at what development opportunities players get by coming to play for the Clan.