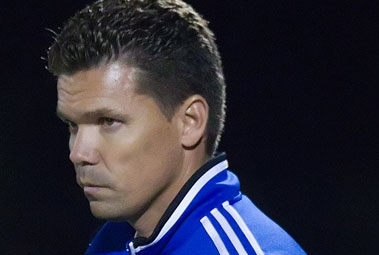 After looking at why SFU went down the NCAA route and issues arising from that yesterday, we continue with Koch’s view on the Clan’s season so far, a look at player development in the program and discuss what may lie ahead for some of the current squad…

AFTN: With a 19-1-1 record and a place in the ‘Final Four’, the way this season’s gone, has it exceeded your expectations?

Alan Koch: I think we knew we had a good team, but never having played in the NCAA national tournament before with this group you never know. Until you do something for the first time you don’t know how your players are going to deal with things, deal with adversity, deal with the pressures.

To say we’re in the ‘Final Four’ I’d say we’re ecstatic about it, but now that we’re here with the group that we have, the sky’s the absolute limit.

And our goal all season long has been one match at a time. It didn’t matter who we’re playing, we’re focussing on that game so we’ll go one game at a time.

We’re very happy of course to be where we are, but we’re not satisfied yet.

The one loss on your record came against Northwest Nazarene on September 15th. That 2-1 defeat meant that you ended up tying the record for the longest unbeaten streak in the GNAC at 24 games. Do you feel that defeat actually helped your season as it took the pressure of you a little with all eyes not on the unbeaten record?

Best possible thing that could have happened to us because it made all of us, myself included, focus on one game at a time.

It now how far is this streak going to go, what we’ve achieved in the past, what’s going to happen in the future.

It’s if you don’t focus on the game, you’re going to lose sight of what you have to do. And I don’t think we weren’t focussing on that game, we just had one of those games were we weren’t very good. We had ample opportunities to score and finish them off. We didn’t.

They scored, I don’t want to say lucky goals, but goals that…I think one went off the guy’s shin into the top corner. That happens in football. We just had one of those days.

It was the best thing that could have happened to us as it brought us back down to earth, made us refocus. We go one match at a time and it’s part of why we are where we are today.

One of the keys of the Clan this season has been your ability to score late goals, especially in games when it really matters. Your last two playoff games have seen you score the winner in the final ten minutes of the match and the team has that ability to play hard right to the end, which must be pleasing as a manager.

I think we have fantastic team depth and we just go at it for ninety minutes. The guys literally know that when you’re on that pitch you give it everything you can, you don’t hold back. When you’re knackered you come off, somebody goes on and finishes off the job.

The guys will go and wear plays down. I think if you look at the goal against Incarnate Word, the left full back, who had a great game dealing with Chris Bargholz, literally fell over when he was going at him in the box. And that wasn’t just Chris, that was a combination of our outside midfielders.

We got Chris off, somebody else went at him. I can’t remember if it was Lucas Ferritto or Colin Jacques was just going at him, took him off, put Chris back on and the guy fell over just because of sheer fatigue.

We have NCAA rules that we use with substitutions, but if that’s the template we get given to utilise, we have to utilise it and I think our guys do utilise it.

It’s tough as footballers sometimes to play just 15 minutes, but our players in attacking positions do a good job of making the most of the time that they have on the pitch.

There’s been a lot of scouts up watching the Clan this year from MLS and other clubs. Without naming names, how many of your guys right now do you feel can go on and take the step up to the next level, whether that is MLS or D2?

There’s a big difference between MLS and NASL. I would say we definitely have a handful of players who are capable of playing in either of those leagues.

Who can make the jump to MLS? I don’t know just yet. It’s a few of our guys who are the freshmen, sophomore, juniors, that are our best prospects in terms of making that jump.

We wouldn’t be in the NCAA Division 2 ‘Final Four’ if we didn’t have a core group of guys who were capable of playing at the professional level. Some of our better players are younger guys and it will be interesting to see how they develop over the next year to two years to see how far they can go.

But I think it’s only a matter of time before we have our first player drafted into MLS. Players at the upper echelons of Division 2 are drafted all the time, so we’re at that level now, so somebody is going to have to pick up one of our players pretty soon.

Talking of development, with the regular season wrapping up next weekend, what happens next? I know some of the guys are going to go and play VMSL (Vancouver Metro Soccer League) and things like that, so is just a case now of training and exhibition games?

We shut down in December. That’s holiday time. Then in January we can start training again. We can do strength and conditioning stuff in January, then in February our Spring season starts and then it’s February, March, April where we can train essentially close to five, six times a week and play games during that time.

They’re friendlies but it’s a big development time for us to see some players who haven’t played much to see how they do in games.

A good example is Jason van Blerk (Whitecaps Residency product). He’s come in and only played a few minutes this season. The springtime is going to be a great opportunity for him to get more minutes and we can see what he’s good at, what he’s not good at and see how far we can take him for next season.

Jason’s just an example. There’s several players that are in that boat.

We have essentially an all round model. It’s year round. You play for us in the fall. The guys that don’t play for us much in the fall, we’ll get them straight into the VMSL once the season finishes, so they can go and play in the mens’ league. Then we have our spring season, which goes all the way through until April and then there’s the PDL in May, June and July or for some guys that don’t play in the PDL they can play in the Pacific Coast League here, or we have other lads that can go back to Ontario and play in one of the Ontario leagues too.

It wouldn’t be as successful a product as it has been if players weren’t able to do the things that they’re allowed to do.

With the success that SFU have had this year, do you feel that you’ve made Simon Fraser a major university that Canadians are going to want to come and play for instead of heading down to some of the American universities?

Yeah, I think so. The number of emails and phone calls we’re getting from players all over the place, not just Canada, the US too, is mind blowing.

I’d would say between the start of the season and the end of the season, I’d say we’re probably getting five times more emails and phone call a day than we were beforehand.

We’ve been getting a lot of contact locally. I think people have known that we have a good product for a while, but now across the country, and all over the States, we’re getting contacted by players everywhere.

I think we’re in a really fortunate position now and now we have to make the most of it.

You’ve spoken before about how you’ve helped players our. The Norwegian striker you helped get a contract in Norway, Ben McKendry you helped arrange for him to go to New Mexico. Are you going to be more guarded about people now?

It’s very easy to poach players. Division 1 can poach Division 2 and they don’t have to sit out a year. Are you going to be helping players along that way or do you want to kind of guard against that now that you’re getting more attention?

We will help our players go play at the professional level. If we have a freshman that’s good enough and wants to go play pro, we will help him right away.

It’s part of what we do.

You’re in certain places in the pecking order in terms of how football works. The NCAA Division 1 is not better than what we have here, so for someone to go to a NCAA Division 1 school, unless it’s an UCLA or an Akron or somewhere that’s a big time program it makes no sense really.

But going to play in MLS, NASL, helping our players get options in Europe, we’ll definitely be doing that.

We have a couple of our freshmen who, without mentioning names, I’m exploring when our spring season finishes to send them over to go train with the U19 teams of the Bundesliga, so we want to do that for a couple of guys.

Get them over, they can spend some time with a U19 team in the Bundesliga in Germany. They can see them. They can work with them. The guys will come back better players from our perspective, but the opportunity also exists for a Bundesliga team to pick them up at some stage.

Those are the opportunities we’re exploring for our guys. It helps our program, it helps me, the more guys that go pro. We’re fully supportive of that.

If somebody wants to go pro, this is the place to be because one, we’re the only Canadian university where you can be drafted, you have to be here if you want to go and play in the MLS. And if you want to explore other opportunities, which we’ve provided for countless guys, we will help out with that too.

At the same time, we’ve got to win a NCAA National Championship, whether that’s this year, next year, whenever that is, we’ll keep on fighting till that happens.

Well we certainly hope that it’s going to be this year, but whatever happens at the ‘Final Four’, SFU Clan have had a season to be proud of and are now most certainly on the map in NCAA Division 2 and producing some excellent talent, especially local BC lads.

Thanks to Alan for opening up the doors of SFU to us last week in what is a busy time for the team.

We’ll have more from Alan on Wednesday when we preview the semi final against Saginaw Valley Cardinals, but ‘Clan Week’ continues tomorrow with a chat with two of the Clan’s key players this post season, striker Carlo Basso and midfielder Chris Bargholz.