AFTN’s annual Residency Week is back for it’s seventh season.

The USSDA playoffs kick off on Monday, with a new home and a tweaked format. The USSDA signed a multi-year deal with San Diego to host the next few academy playoffs, with the 104-acre SoCal Sports Complex at Oceanside the tournament’s new home.

Both of Vancouver Whitecaps’ sides have reached the postseason once again. The initial playoff format remains unchanged. 32 teams will still take part in the group stages, split into eight groups of four and played on a round robin basis.

Only the group winners will advance, but instead of the quarter-final matches being hosted by the top four seeded teams remaining, these will now be played in San Diego after the group stage concludes. Logistically it makes sense, but we’ll miss cheering the guys on in some exciting last eight matches up here in BC.

The Whitecaps U19s kick off their playoff quest on Monday after another strong season in the Northwest Division of the Western Conference.

The Whitecaps finished second in their division this year behind Crossfire Premier, after a season long battle between the two teams that went down to the wire. The ‘Caps finished the season with 68 points from their 32 matches, three behind Crossfire. Their record of 22 wins, two draws, and eight defeats was good enough for a 10th seeding in the postseason, making them the second seeds in their group.

“Crossfire, for sure, were a good team,” U19s head coach Rich Fagan told AFTN at Residency training last week. “They were probably the toughest opponent we had all season. They’ve been a good team for three or four seasons, that particular group, so credit to them.”

The ‘Caps scored 94 goals over the course of the season, the second highest in the Division and the third highest in the Western Conference. Leading the way in the goalscoring stakes was Jose Hernandez with 22 goals, while Theo Bair hit 16, Jefferson Alade had 10 (both of whom are pictured below), and Georges Mukumbilwa struck 8. 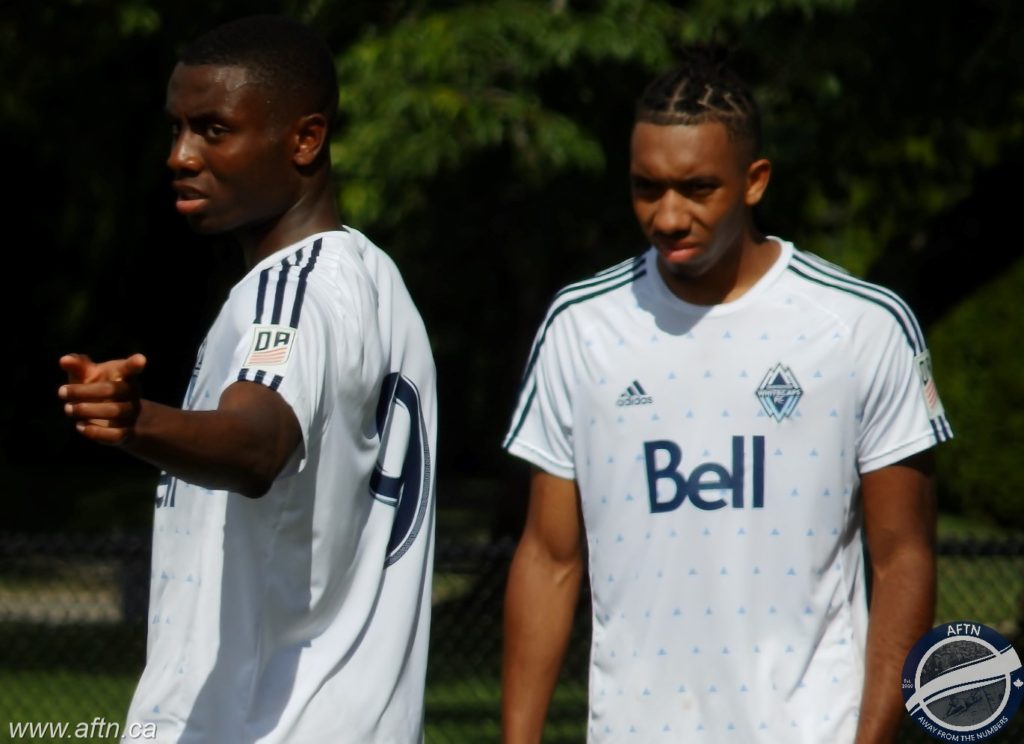 But the goal threat comes from all over, with 15 different players finding the net for the young ‘Caps so far this season.

“We’ve got good balance,” Fagan feels. “Really our front five, and when I say five, the 8’s and the 10’s, we get good goals from the midfield as well as the front three. We’ve been very good on set pieces this season as well. It’s not often we get outscored.”

At the other end of the pitch, the young ‘Caps were pretty miserly, giving up just 40 goals over the season, the best in the Division and the second best in the Conference. Thomas Hasal (11 starts), Evan Ince (10 starts), and Trevor Schneider (11 starts) shared the goalkeeping duties, putting up 12 clean sheets between them and continuing the Whitecaps very strong conveyor belt of producing top quality keepers [pictured below].

“Thomas has been in and out of the team a little bit, most recently with a hand injury,” Fagan revealed. “He’s had a strong season, but both Trevor and Evan have done really well too. The back four has been pretty consistent. There’s been the odd change with Andres [Charles-Barrera] kind of splitting his time between holding midfield and centre back. 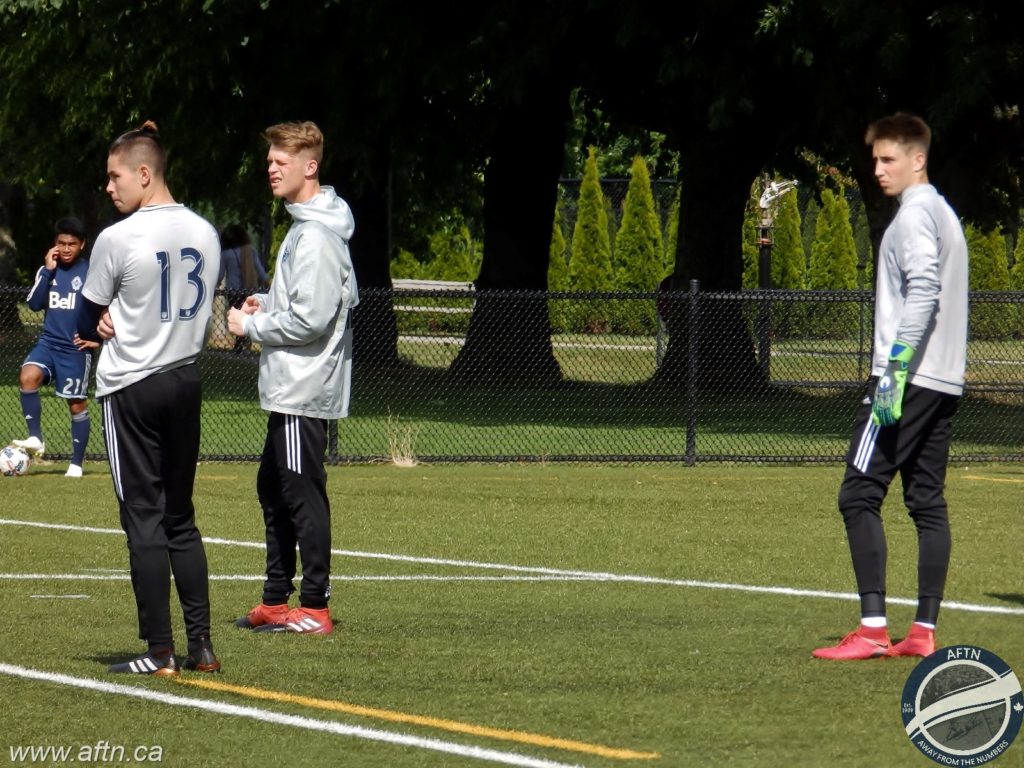 This is the first season of the USSDA’s new age groups, with the U18s becoming U19s and the U16s now U17s. Whatever they’re called now, the Whitecaps will be hoping to at least emulate what their U18 groups achieved in 2012 and 2016, and that’s make the Championship game, while the U17s will be looking to follow in the footsteps of the U16s last year and make at least the Final Four.

The initial path for the U19s looks to be a tricky one, but one which they are more than capable of getting past. They’re drawn in a group beside the 5th seeded Pateadores, the 20th ranked New England Revolution, and the third lowest Wildcard side, Crew SC Academy Wolves.

The Whitecaps have faced the first two of those foes already this season, losing in stoppage time to Pateadores and beating New England in a recent friendly.

The Revolution are first up for the Whitecaps on Monday, with the match coming just three weeks after a friendly between the two teams at UBC prior to the MLS match between the two sides. The ‘Caps were missing several key players for that one, and kept a number of first choice players on the bench. It was one of those players, leading scorer Hernandez, that came on and struck the winner in a 1-0 victory.

New England finished third in the Northeast Division of the East Conference this season, behind two other MLS academies – Montreal Impact and New York City FC. They were well adrift of the divisional winners Montreal in the end, finishing 16 points back on 48 points from their 26 matches. The finished the season with a record of 15 wins, three draws, and eight defeats, scoring 69 goals and giving up 49.

Timothy Ennin appears to be the man to watch. The striker hit 17 goals from his 25 matches, with midfielder Isaac Angking not too far behind on 12. Angking has already been signed to a MLS deal by the Revs before the start of this season and is an US youth international.

That victory for the undermanned ‘Caps just a couple of weeks ago should give them confidence to do the same again and get their playoff campaign off to the perfect start when the game kicks off at 4pm. 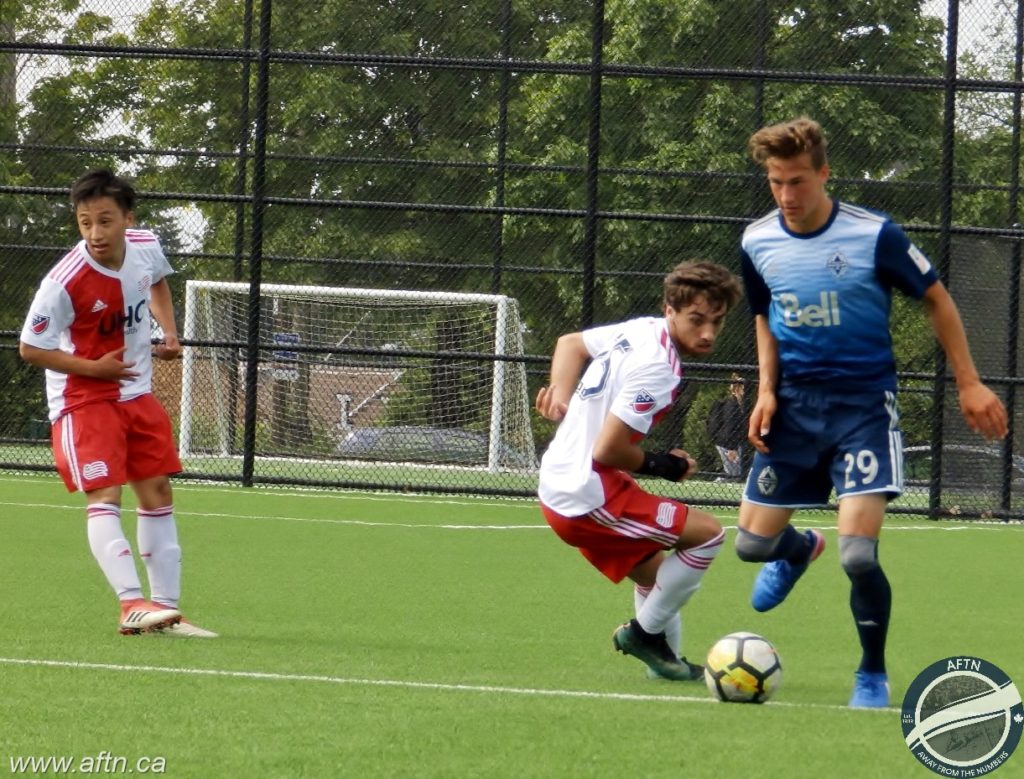 Crew SC Academy Wolves are up next on Wednesday (kick off 3.15pm). Based out of Livonia, Missouri, the Crew Academy are the third lowest ranked team in the playoffs. They finished fifth in the Mid-America Division of the Central Conference with 39 points from their 23 matches and a record of 12 wins, three draws, and eight defeats.

They scored 47 goals, giving up 41, but did keep six clean sheets, so their defence can certainly be hard to break down on occasions. They had three players that finished the season in double figures for goals – forward Derick Broche (16), forward Farai Mutatu (13), and Jack Beck (10).

You certainly can’t take anything for granted in the USSDA playoffs, as past history has unfortunately shown us, but the ‘Caps will have this one jotted down as a must take three pointer.

With just one team advancing to the knockout stages, Pateadores look to be the biggest obstacle in Vancouver’s way.

Topping the Southwest Division of the Western Conference with 73 points from their 30 matches, the Californians finished the season with a record of 24 wins, one draw, and five losses, scoring 90 goals and equalling the ‘Caps in goals against with 40.

Their key attacking threat is striker Kyle Holcomb, who hit 28 goals from his 24 appearances. An impressive record and it comes on the back of the 26 he scored last year. He also leads the team with seven bookings and one sending off, so getting under his skin would appear to be a good Whitecaps tactic for this one.

Vancouver and Pateadores met in their only match of the season up at UBC in February. The visitors came away with all three points in a 3-2 victory thanks to a stoppage time winner from the spot by Dylan Shockey.

The two teams meet in the final group game on Friday (kick off 4.15pm) and you have to feel that all the marbles will be on the line for that one.

“Looking ahead to the playoffs, I think we’re a little bit more fortunate than we have been in the past, in that we’ve seen two of the opponents already,” Fagan told us. “Which is great. In fact, I didn’t necessarily want to take the New England game at the time, just because it was so close to the playoffs, and we’ve played so many games down the stretch.

“But in hindsight it looks like a really positive thing now. It’s a good group. It’s a competitive group. I don’t know too much about the Wolves, but at least we have an idea of the other two teams.” 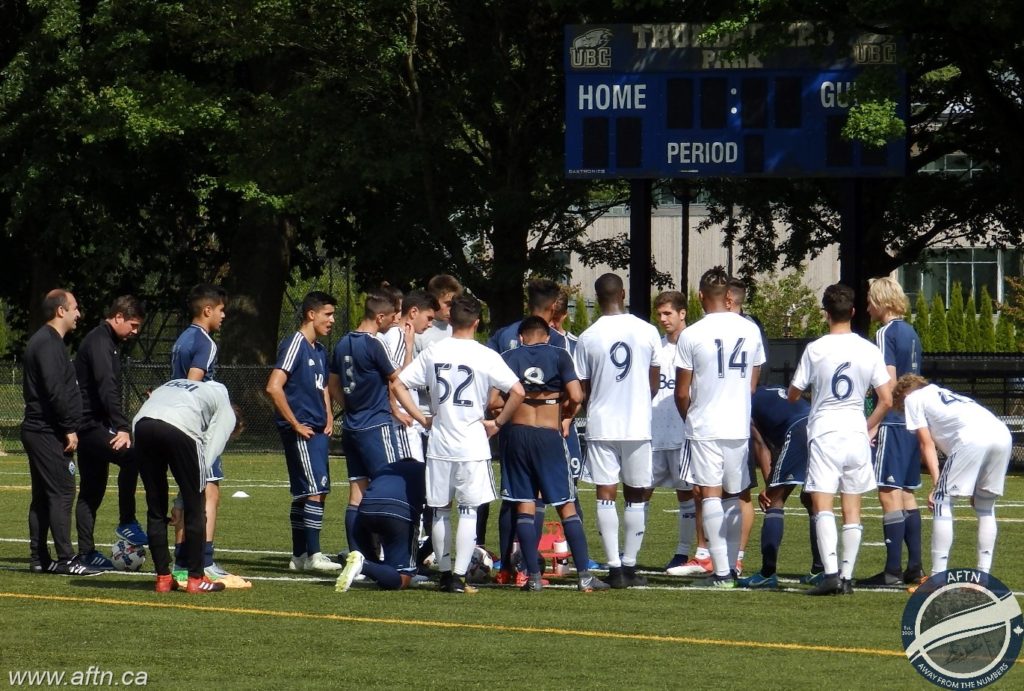 If the Whitecaps get through the group stage they’ll stay down in San Diego for the quarter-finals a couple of days later. Disappointing not to host another playoff match, but Fagan is a big fan of the new look format and the better preparation if affords the squad and hopefully the chance to immediately build on some momentum garnered.

“It’s almost like a World Cup in a sense,” Fagan said. “You’ve got your base, and this is the first time that I can remember that we’re the only team in the hotel. So that makes a big difference for us in terms of our preparation. If we want to have meetings, we can have meetings, and you’ve just got complete control of how we prepare, which is great.

“It’s been great when we’ve been able to play here in front of friends and family and supporters and anyone that’s made it out in the past. That’s disappointing but hopefully we can keep it rolling then after the playoffs.”

And talking of the World Cup, the ‘Caps coaching staff will ensure that the team get some quality downtime to watch the matches, and maybe get themselves some playing tips. Let’s see how much it pays off!

Good luck to the U19s, and we’ll bring you details of how they’ve fared over the course of Residency Week here on AFTN.