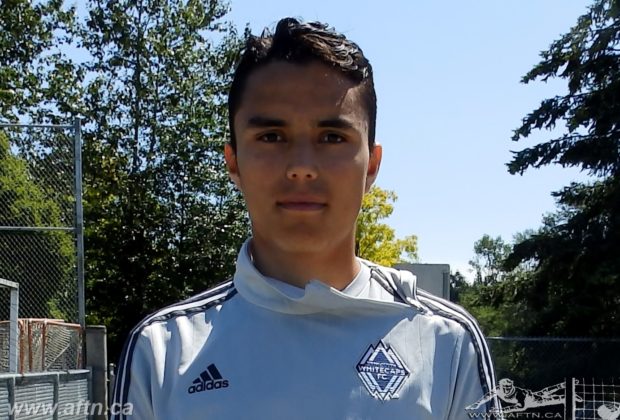 Alphonso Davies may have been the Vancouver Whitecaps Residency player that’s attracted the most chatter so far this year, but there’s another name in the ‘Caps U16 side that you should familiarise yourself with, because we have a feeling it’s one that you’ll hear a lot more of in the coming years.

Alan Camacho Soto has had a phenomenal season with the Whitecaps U16s. The striker has banged in 29 goals in 31 matches, the most of any player, at any age group, in the USSDA system this season.

Camacho brought the Golden Boot home to Vancouver with an impressive 15 goals in the ‘Caps final 11 matches of the season, a strike rate that included two hat-tricks along the way.

Not bad for a player in his first full season within the Whitecaps system.

“I think my season has gone very well,” Camacho told AFTN when we caught up with the striker before the team headed down to Frisco for this week’s USSDA playoffs. “Since the start of the year I’ve scored goals and I’ve continued that throughout the season and I’m hoping to continue that throughout the playoffs too.”

So far he has. Camacho continued his fine goalscoring form down in Texas, firing home the ‘Caps first two goals in their 3-0 win over Kendall Soccer Coalition in their first group game on Wednesday.

It was another strong showing from the U16s, who are ranked third in North America as they head into the postseason. Camacho may have led the way in the scoring, but it’s been an impressive all round team effort that got the ‘Caps to that position and they’re confident of success.

“The team has been really, really good,” Camacho told us. “We’ve had strong performances and then we had a little downfall at the beginning of January and then a little bit through February, but we’ve built up and we’re strong again. So we’re looking at hopefully winning the USSDA Championship.”

As on fire as he is right now for the Whitecaps, Camacho’s journey to the Residency program wasn’t all plain sailing.

Camacho moved to Burnaby from Mexico with his family aged six. After excelling with his local teams, he tried out for the Whitecaps on several occasions before finally getting into the Residency program at the fourth attempt.

“We moved here in 2007 and I haven’t gone back to Mexico, so I’m pretty much raised here in Burnaby,” Camacho explained. “I played with Cliff Avenue, Burnaby Selects, Mountain United and then the HPL teams.

“I actually came on trial three times and I didn’t make it the first three times. It’s kind of a good story but it was also hard. It was hard to try a lot of times. Then the fourth time I came back here, February of last year, and I got the opportunity and I’m just glad to be here.”

Camacho joined the Whitecaps towards the end of last season as a 15-year-old, and headed down to Indiana for the playoffs as part of the U18 side, coming on as a sub in all three games.

Settling into his own age group, Camacho has thrived this season, impressing his coaches along the way.

“With Alan, we use the term that he’s a natural goalscorer,” U16 head coach Adam Day told AFTN. “His instinct in front of goal is something that isn’t really taught in my opinion. He’s just got that natural ability to find the ball in right areas and put the ball in the back of the net. He’s very determined. He’s selfish in good ways that all good number nine’s need to be.” 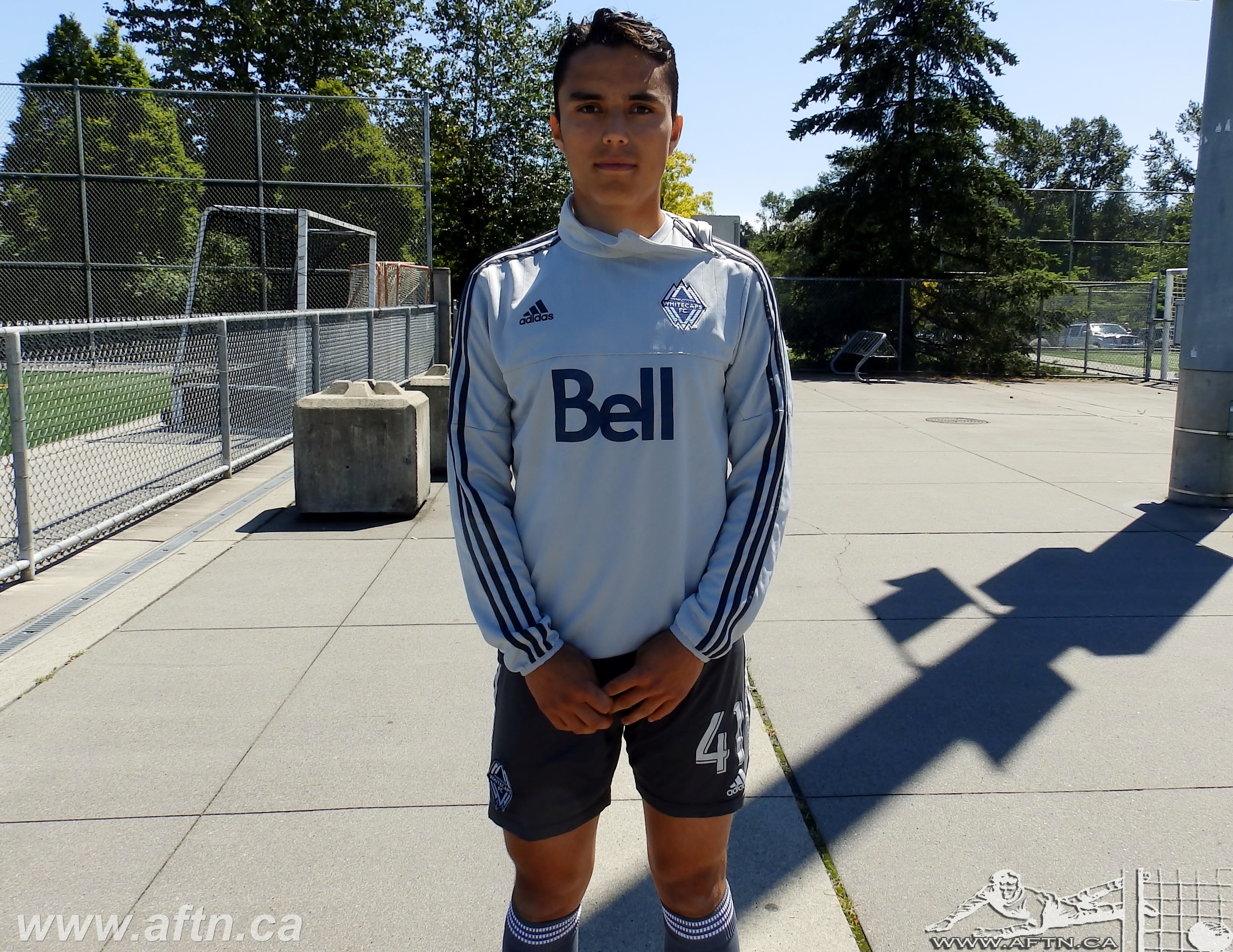 So after such an excellent season, and with other players in the program moving up to the USL team, has it been difficult for Day and his coaching team to keep Camacho grounded?

“It hasn’t really been a tough sort of ask to keep him grounded,” Day told us. “He’s a very grounded kid. He’s from a very humble, grounded background. He’s very appreciative of where he is in life, and that’s on and off the football pitch. I’ve said this before, but he’s probably the hardest working player in the group on a daily basis, on a weekly basis. It’s been no issue at all about keeping him grounded.

“I think the last few weeks of the season, when he had the target of being the top goalscorer in the back of his mind, it was just trying to reassure him to just keep doing the things that got him into this position in the first place and not to be too selfish and really think of the needs of the team because that ultimately has got him the goals. Bringing your teammates into it and then giving the passes that he puts in the back of the net. That was only it. Probably the last two weekends of the season, just keep doing what you’re doing, just play how you normally play and the goals will come, and they did for him.”

It also must be hard to tell a player who is banging in goals aplenty that he still needs to improve and work on his game to get better, but Camacho is the first to admit that he knows where his weaknesses lie and what he needs to improve upon to take his game to the next level when he moves up to the U18 side next season.

“Maybe playing a lot quicker,” Camacho mused. “I need to work on my speed. I’m not that fast, but I have other strengths. The thing I need to work on the most is my back towards goal and my hold up play. Also distributing the ball when I have it and keeping possession. If I do that, I feel I can be a really good player.”

Camacho’s form is also good news for fans of the Canadian national team. The striker hasn’t yet been involved in national team camps because he wasn’t eligible to play for Canada yet, but that should all be about to change.

“I actually just got my citizenship two weeks ago and I picked up my passport this last Tuesday,” Camacho said with a proud smile. “I went and picked it up and now I have it and I’m very happy to be a Canadian citizen. It’s a real pleasure.”

While Camacho hopes to don the red and white of Canada one day, he also dreams of running out for the Whitecaps in MLS action, having been a big ‘Caps fan since before joining the Residency program.

“Before, when they were at Empire Stadium, I used to watch them there,” Camacho told us. “I’ve always felt, and I have a feeling, that I’m going to get to play at BC Place one day. That’s what my mentality is.”

If he keeps up his goalscoring form, there’s every chance that he will.

You never want to put too much pressure on any young player, and we’ve seen the likes of Caleb Clarke and Brody Huitema light it up for the Residency in the past, but not really able to turn it on the same way as they move up through the older age levels.

The good thing now of course for this current crop of Residency players is that the Whitecaps have their USL team to further develop their talents in a professional set up, blooding them in pro games against much older players and able to keep a much closer eye on them.

Seeing players like Alphonso Davies, Kadin Chung and all the other Residency talent that have moved up, and are regularly contributing, to the USL side is all the carrot that players like Camacho are needing right now.

“It just motivates us more when you see players getting the opportunity to play in the USL,” Camacho admitted. “And going up to the first team too [like Davies]. It’s really motivating to see players go up there and hopefully I can do it too some day.”