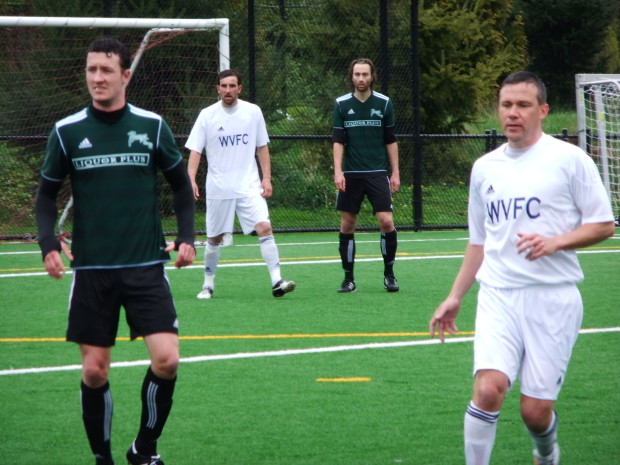 West Van claimed a spot in the 2013 Provincial A Cup semi finals with a hard fought 5-2 win over island side Bays United at Ambleside on Sunday afternoon.

A frantic finish saw five goals, a disallowed goal and a sending off in the final seven minutes of regulation and stoppage time in an entertaining game, which saw both sides play some nice, attacking football and a scoreline that didn’t reflect how tight the game was for much of the match.

The game was a rematch of last year’s first round tie and the first half saw West Van pressing and Bays were happy to deal with the pressure and look to hit on the counter attack.

With around ten minutes of the half remaining, West Van won a couple of corners. Bays thought they had cleared the danger but the home side kept coming and they got their reward when Mike Winter was put through and finished low past United keeper Steven Welle.

With one goal in it, and with both sides having had their half chances during the first period, you felt that the second half would be an entertaining affair. Nothing set it up for the action packed finish that it turned out to be.

Bays started the second half well and were pressuring the home side more, as expected. Paul Vandenboomen had a nice attempt at a speculative shot with the keeper off his line that would have been trouble for West Van if it had been on target.

West Van had a chance to double their lead in the 57th minute when Desmond Tachie was sent free up the right. The striker cut into the box but blasted his shot over from a good position and should have done better.

They were made to pay a minute later when Bays’ Kellen Holden was pushed over in the box by Trevor Short as a free kick came over. Jordie Hughes stepped up and drilled the penalty down the middle to tie the game up at one apiece.

West Van turned the pressure up a notch once again but weren’t carving out any clear cut chances and the island side caught them on a quick breakaway in the 70th minute when Wesley Barrett broke up the right and shot just inches past the left hand post with the keeper beaten. West Van defender Tim Perry did well not to turn it into his own net as he ran into the six yard box.

The game started to have a chess match feel to it with both teams looking to pick out the perfect move and keen not to make any mistakes that would cost them the tie.

West Van broke the deadlock though in the 84th minute from a short corner. The ball came to an unmarked Max Baessato in the box and hit home past three Bays defenders and what looked to be through the legs of Cathal O’Connor. It may have got a touch of O’Connor but it happened so fast it was hard to tell.

It was a tough break for Bays United, who looked to be taking the tie to extra time for the second year running.

Worse was to come three minutes later when Kyle Finner was sent off the islanders when he brought down Jesse Fetterley in the box. It looked a penalty, but the red card seemed harsh.

Former Whitecaps captain, Paul Dailly, stepped up and hit a perfect penalty into the bottom left corner and it looked to be game over at 3-1 to West Van with three minutes remaining.

It turned out to be far from it with four more goals, three of them counting, still to come!

Going a man and two goals down would have knocked the stuffing out of most teams but to their immense credit, Bays hit back immediately and Holden finished a cross from the right at close range to bring the visitors back to within a goal in the 88th minute.

The referee indicated four minutes of stoppage time and with the game a minute in to it, West Van restored their two goal lead.

Drew Kelley played a free kick wide left to O’Connor, who got past James Rhodes with ease, hit the byeline and cut the ball back perfectly to Fetterley who finished it wonderfully into the postage stamp corner, giving the Bays keeper no chance.

Bays just wouldn’t die though and immediately went up the field and Holden was played in and had the ball in the net again but the linesman put his flag up late for offside. From where I was standing just behind the line of play, he looked on.

It probably wouldn’t have made too much difference, but with Bays pushing forward to try and pull off a miracle, they were caught at the back again in the 93rd minute.

O’Connor slipped the ball through to Fetterley and he squared it to Stefan Crameri and with the keeper committed, he had the easy task of hitting the ball into the empty net.

Five past Bays United and time for the referee to blow his whistle for the end of an entertaining quarter final.

It was an extraordinary ending and anyone simply looking at the scoreline will have thought that Bays United were on the wrong end of a hammering.

West Van looked to have the edge for most of the game and were deserving of their victory but Bays must get a lot of credit for never giving up and playing some nice attacking football. The odd break here and there and we could have been looking at an all island semi final.

As it is, West Van will now travel to the island to face Cowichan next weekend, in what should be another great game.

Here’s some video highlights of the West Van-Bays game, including good footage of three of the goals, a quick snippet of another and just a blurry mess of another still! Enjoy: