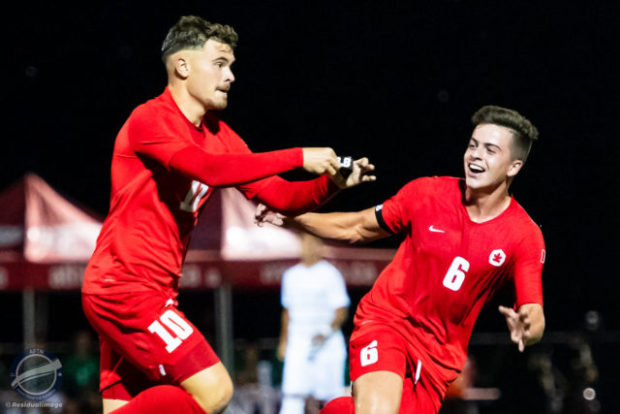 It was an emotional and highly charged Thursday evening at Terry Fox Field as SFU Clan opened their 2019 NCAA Division 2 season with a comprehensive 3-1 victory over old foes Cal Poly Pomona.

This one didn’t feel like a season opener. Anyone stumbling across the match would have thought they were watching a playoff game with the intensity on display. From the large, raucous crowd in attendance to the Clan players’ goal celebrations, this was a game that mattered, on a number of levels.

This was a match to remember, a match to right some wrongs, and a match to make a statement, and the Clan players rose to the occasion.

Among the euphoria of the beginning of a new season and a victory over a team that has simply had SFU’s number these past few seasons, there was sadness. This was the first competitive match since the tragic passing of Clan defender Brandon Bassi in a car crash in May, and SFU paid tribute to the 19-year-old in fine style.

No-one is wearing Bassi’s number 22 shirt this season, but the players are wearing armbands to remember their friend and teammate and a moment of reflection was held prior to kick off.

Emotions were high and when Matteo Polisi fired the Clan in front in the 28th minute, those emotions exploded, with last season’s leading scorer running to the crowd holding out his Bassi tribute armband, mobbed by his current teammates.

When William Raphael made it 2-0 two minutes later there was more joy, and not even Jimmie Villalobos’ long ranger effort off the post a minute before half time could dampen it. 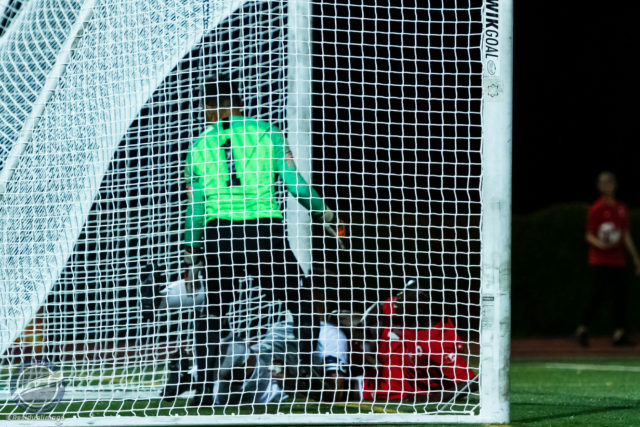 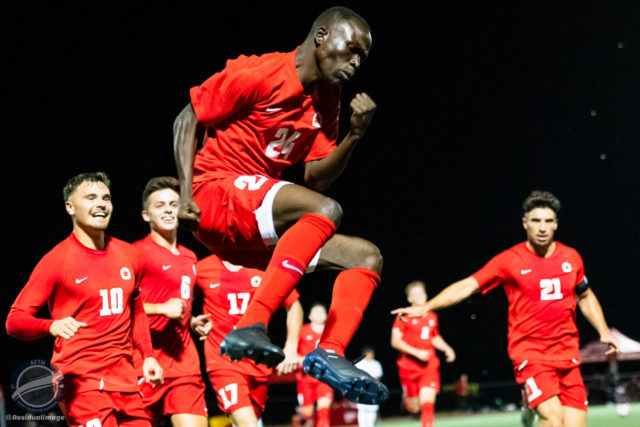 But Cal Poly are a dangerous side, as SFU know only too well. The Californians have ended the Clan’s postseason hopes in each of the last three years, the latest of those coming in November when SFU dominated the match but lost 1-0 in sudden death overtime, with Clan keeper Luciano Trasolini not even registering a save over the entire 97 minutes.

Pomona aren’t ranked number two in the country for no reason though and the Clan knew they had to put in a solid second half to get the job done and claim not only three vital points to start off their season, but to make a statement right off the bat against a team that’s made the NCAA Division 2 Final Four in three of the last four seasons.

And they did. Cal Poly turned up the pressure at the start of the second half but Norwegian rookie Christian Hanche-Olsen putting the icing on the win cake on the hour mark for SFU to secure a 3-1 victory. 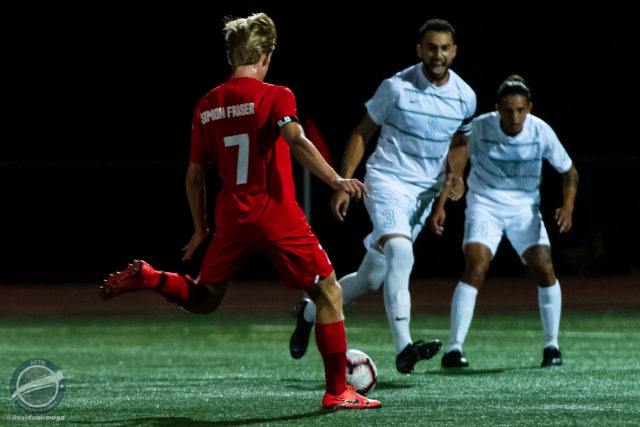 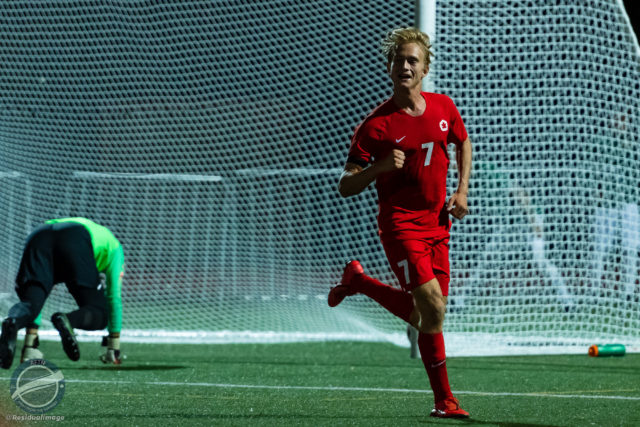 It may not make up for those playoff losses, but this was a match SFU desperately wanted to win and for head coach Clint Schneider it wasn’t so much the victory that delighted him the most, but the matured composure of it.

“I’d be lying if I said our boys didn’t circle this one when the schedule came out,” Schneider told AFTN after the match. “Understanding that the last game we played, we lost, and now we get another crack at them. They’re a very good side and one of the better sides we’ll see probably this year. That’s the reality, so I’m proud of the guys.

“You know, we’re comfortable playing on Fox. I think you saw some of the strengths in this team, winning games right away, very good in transition. We talked about it, so it’s very good for us to execute. We were under it, and we knew we were going to be under it for a little bit too, but I think we weathered the storm and so very happy with the performance.”

Being comfortable on home turf is an understatement. SFU have lost only four of their 78 matches at Terry Fox Field since making the move to NCAA in 2010. They’re unbeaten at home for approaching five years now and Thursday night’s win increased their run to 33 matches. The place has become a fortress, all the more frustrating then that the powers that be have deemed that the Clan cannot host playoff matches in Canada.

But SFU were at least able to enter into a four year agreement with Cal Poly, Cal State San Bernardino, and Montana State Billings to stage a season opening tournament. This was the Clan’s first chance to host the non-conference tournament, and after three years starting on the road, it’s been a welcome change for Schneider and his team. 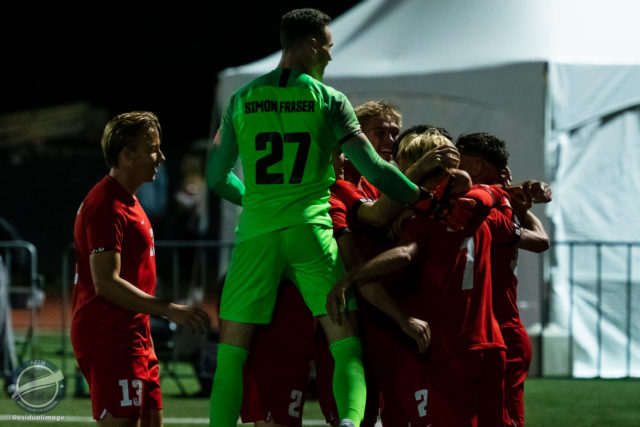 It should set them up for another strong season. They’ve been a dominant force in the Great Northwest Athletic Conference (GNAC) since joining the NCAA system, winning seven of nine conference titles, including the last three straight. The Clan famously reached the Final Four of the Division 2 tournament in 2012 and 2013, but it’s been slim picking for them in postseason play since.

You could argue that it’s been a failure to perform when it matters, perhaps the lack of quality competition in GNAC, maybe even the travel, but for Schneider it boils down to one simple thing – Cal Poly Pomona, their conquerors these past three seasons.

“It’s those guys,” Schneider was quick to admit pointing over to the Cal Poly squad. “That’s a fantastic team and that’s a team that will grow as this year goes, and we will too. [Every season] we catch them and the playoffs and we both know that whoever is going to win this game has a chance to win the national championship.

“So fortunately, unfortunately, we’ve caught them, and we just haven’t won that game. They’ve been better than us in that game. We’ve had [strong] teams, I believe we have another team, and I think we’re very deep this year. There’s some quality in this group and very happy with that for everybody. There are some guys here with some debuts that were big time.”

The Clan have an experienced squad for this year’s quest for their first national title, returning 13 letter winners and seven regular starters from last year’s squad. Matteo Polisi led the scoring last season with 18 goals, adding an additional 11 assists, and he’s already off the mark this campaign, but this already looks to be another potent Clan attack, with goalscoring threats all over the park.

One of those players is William Raphael. 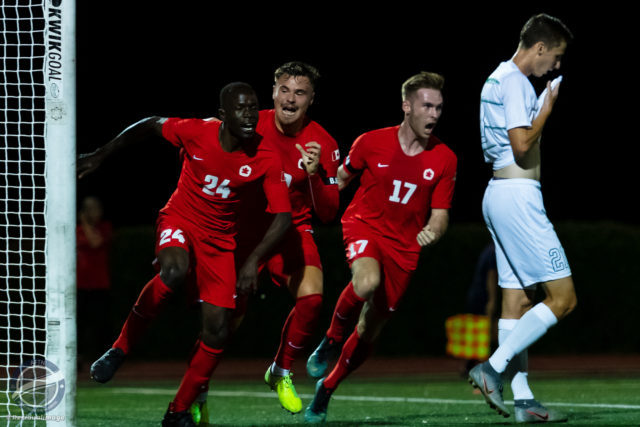 Raphael hit the Clan’s second goal on Thursday night, his first for the team after missing all of last season with injury. Much had been expected from the South Sudanese refugee after wowing the Clan coaching staff at an open tryout. A PDL season with TSS Rovers last year saw the striker struggle at the higher level and then injury hit.

But that time away seems to have invigorated Raphael, who is back in action looking sharper than ever and showing a much better footballing IQ, and was rewarded for his efforts against Cal Poly with a goal and an assist on SFU’s third from Hanche-Olsen.

“He’s confident, healthy,” Schneider said of the revitalized Raphael. “This happened a while ago, I think Will Cromack [TSS head coach] made a comment about him playing in the CPL after he watched him in a training session, and I think some people were like, yeah, whatever. But you can see it now though, right?

“He’s absolutely electric, and especially in a game like this where they would press into one of our centre backs and if the ball was good enough to hook in and that the runner was running off the shoulder of a centre back he’s on and that’s how we scored that the third goal to finish it off. That’s an easy one. Tap in.”

Norwegian midfielder Hanche-Olsen is one of 12 new faces on the Clan squad for the 2019 season, joining his countryman Peder Syvertsen and Dutch defender Jorick Schilken as key additions from Europe. But it was Ugandan midfielder Mark Talisuna (pictured below) who particularly stood out for Cal Poly, with his pace and trickery in the first half causing the Californians a lot of problems. 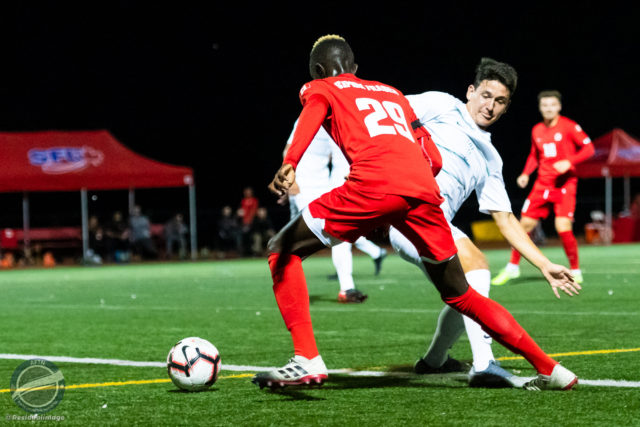 This is Talisuna’s third year studying at SFU, but his first on the soccer team. He’s been on coach Schneider’s radar for a while, however, and after watching him get playing time and develop in the Fraser Valley Soccer League with Port Moody Gunners, the coaching staff felt this was the ideal time to bring him into the fold.

“We brought him in in the spring a couple years ago, and we liked him,” Schneider told us. “But we thought you know what, go play, just go play men’s soccer. He played for [FVSL champs] Port Moody and there’s been tremendous growth. We said we need to have him part of this team and not only that, he’s a guy that, especially in preseason, that’s been one of our best players.

“You can see in possession he’s extremely comfortable on the ball and he’s grown as a player out of possession. That was probably his biggest weakness, but he’s gotten better and embraced that and so it’s really exciting for him because it’s just, it’s good to have the kind of quality in the group. We have guys like him, Kyle [Jones] is on his way back. Marcello [Polisi] is on his way back and you have a midfield where we can work teams in a variety of different ways.”

Great news for the Clan on the injury front, but not perfect, as just as everyone was set to get fit and healthy, down went a key starter, third year goalkeeper Trasolini, to a freak physio room injury just before the Cal Poly game and he was forced to spend Thursday night watching the match on crutches from the touchline.

“He cut his foot,” Schneider confirmed. “He’s got stitches on it but from my understanding, no other issues. Just stitches, so a couple of weeks [out]. It didn’t feel good, he didn’t feel good, and of course Luc wanted to be a part of this. He’s a very important player, but you saw Aidan [Bain] come in and do well.

“We firmly believe, and we talked about this with the two goalkeepers, that we have two guys who can be a number one, and you need it, especially if something like this to happen, some freak injury, that we feel confident with the goalkeeper we have and Aidan’s worked very, very, very hard to get to the position where he’s at. He had a couple of big saves for us and looked good and comfortable on crosses and managed the game. These are all the things that he’s worked on and gotten much better on that.” 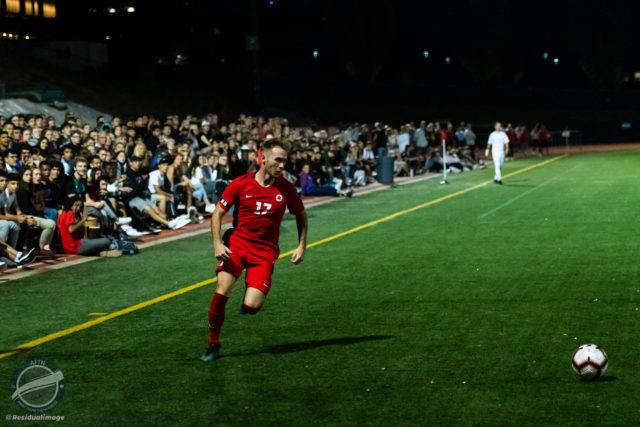 SFU are back in action up the mountain on Saturday night, hosting Cal State San Bernardino in their second and final match of the inaugural Burnaby Showdown. They’ll be hoping to get another bumper crowd out for this one. Kick off is 7pm.

AFTN photographer Tom Ewasiuk was at Thursday night’s match to capture all the action on and off the pitch. You can see more of his photos on our Flickr account HERE and in the slideshow below: 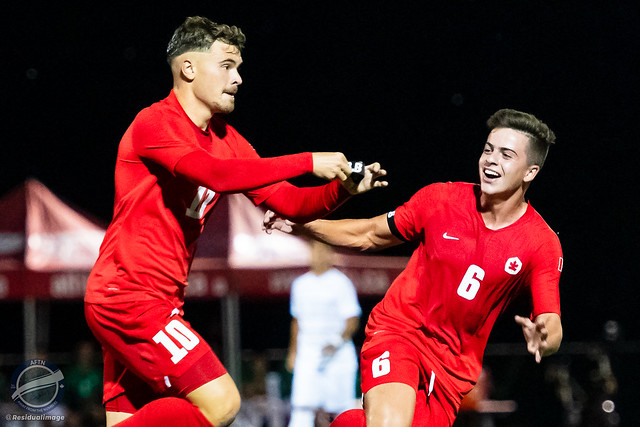