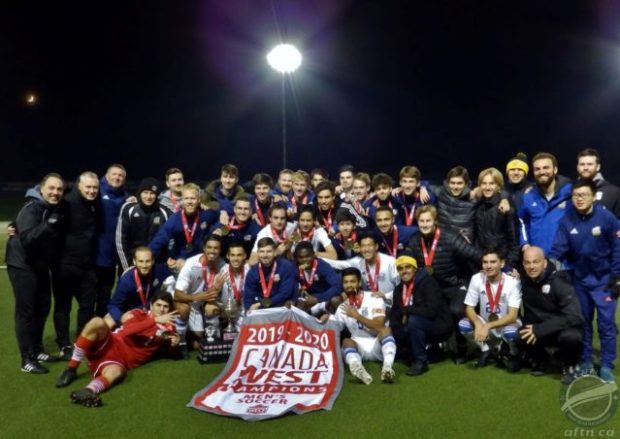 Another year, another Canada West championship for UBC, but the Thunderbirds’ focus is already on next week’s U Sports Men’s championship in Montreal, as the Birds look to exorcise the ghosts of disappointment that haunted them after last year’s poor showing at the nationals that saw them bounced out of title contention at the first hurdle.

The Thunderbirds won their 20th conference title on Saturday night in a dominant display from start to finish. Their latest victims were the University of Calgary Dinos, who were looking to win their first Canada West title since 1980, but there was to be no fairytale for the underdogs, as UBC put in a polished performance and executed another almost perfect game to see off the Prairie Division side 2-0.

A first half penalty from Victory Shumbusho and a strike just before half time from Thomas Gardner, had the Thunderbirds in cruise control and if it wasn’t for the excellent play of Dinos keeper Jake Ruschkowski, the woodwork, and some missed opportunities in front of goal, this was a game that could have got out of hand as UBC outshot their opponents 13 to 2.

But full credit to Calgary, who had already booked their first ever berth at next week’s nationals following their dramatic late victory over Prairie Division champions Mount Royal in Friday’s semi-final, they soaked up a lot of pressure but put in another strong defensive display that forced UBC to work hard, without being able to add to their tally.

It felt like one way traffic at times, but UBC were able to get the job done while also rotating out a few of their regular starters.

“We got on top relatively early and their goalkeeper made a lot of good saves,” UBC head coach Mike Mosher told AFTN after the Thunderbirds latest championship triumph. “If it weren’t for that, we could have had a few more, so very pleased with the 90 minute performance.”

It’s been a dominant playoff run by UBC. One in which they saw off Alberta in last week’s quarter-final, Saskatchewan in Friday night’s semi-final, and then Calgary in the gold medal match, all without conceding a single goal.

The Calgary game was their 10th clean sheet of the campaign. They’ve been strong defensively all season, only giving up 14 goals all year. Four of those came in a lopsided 4-1 loss at Trinity Western in their penultimate match of a regular season that saw them finish with a 10-2-3 record.

But the Thunderbirds’ postseason performances at the back have been particularly impressive, allowing their opponents just eight shots on goal across their three playoff matches so far.

“We’ve had three pretty good performances through the playoff run,” Mosher admitted. “Didn’t concede. But we had to work for it. None of it came easy. We had to grind away and every game’s a little bit different but although we were relatively on top the last two games especially, we worked hard.”

Friday night’s win over the Huskies had already secured another spot at the nationals for the Thunderbirds. Saturday’s victory was just the cherry on top. They fly out to Montreal on Monday in confident mood and ready for whatever the draw may throw at them.

UBC headed into this weekend as the fifth ranked U Sports team in the country, but their Canada West championship success, along with number three ranked Carleton Ravens 3-0 upset win over the number one ranked, and previously unbeaten, York Lions in the OUA championship game on Saturday will see the Thunderbirds secure a top four ranking and set to miss York in the first round match ups.

The currently number two ranked Cape Breton Capers are also unbeaten and start as heavy favourites against St Francis Xavier in the AUS championship game on Sunday. Defending U Sports champs, the Montreal Carabins, are already in as hosts, and RSEQ champions, and will be joined by the UQTR Patriots.

Whoever they face, Mosher knows he has a tough challenge ahead.

“It just depends who we get,” Mosher mused as to what may lie ahead. “Every year the tournament gets a little bit better. If you see, the top two teams from basically every conference have qualified. There’s a lot of the same teams that were here last year, we saw them two years ago, whoever you’re going to get, it’s going to be tough.”

“You saw the games last year, there’s a lot of good teams. There’s no easy games.”

Another year, another @CanadaWest championship for @UBCtbirds. Their 20th in the history books after a 2-0 win over Calgary Dinos tonight. First half goals from Victory Shumbusho and Thomas Gardner got job done. On to the nationals in Montreal now next week for Mike Mosher's men. pic.twitter.com/E2fbwXDCwh