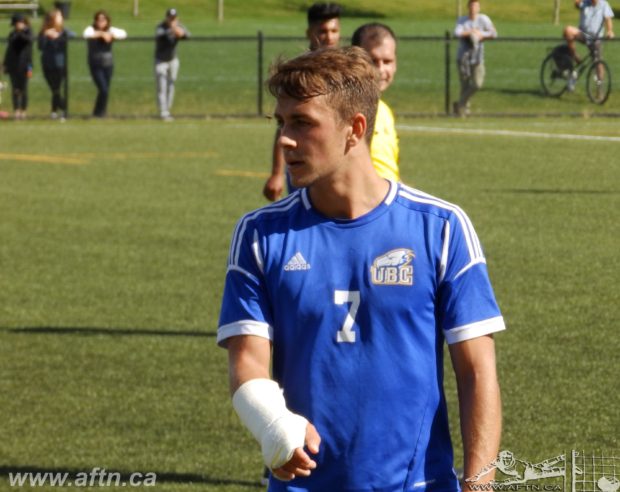 The 2016 CIS Soccer Championships get underway on Thursday with both UBC teams heading out east in strong form, the men to Guelph, Ontario and the women to Wolfville, Nova Scotia.

It’s been something of a transitional season for UBC’s men’s side and they weren’t the dominant powerhouse of seasons past in Canada West. In saying that, they did win another Pacific Conference title, after a battle with Trinity Western that went down to the wire, losing only one regular season game along the way. The bar is set so high with UBC these days that such feats feel like a disappointment!

It was a much different looking UBC side from the last few years after a number of well-known faces had graduated, leaving just three 5th year players and two 4th year ones. The majority of a very young squad were all in their first and second years of the program, and it understandably took a few games for the Thunderbirds to really hit their stride.

The Thunderbirds defence these past few seasons has been a very stingy one, often posting single digit goals against. This time around they gave up 16 goals, recording 11 clean sheets. They scored 34 in reply, but it did feel at times that they were badly missing the kind of prolific goalscorer they previously had from the likes of Niall Cousens and Milad Mehrabi. They were involved in five 0-0 games, including three in a row in September, as the team struggled to find that attacking groove.

Whitecaps Residency alumni Titouan Chopin (pictured above) led the way in goalscoring in his second season with the Thunderbirds, banging in eight goals and adding four assists. Second year midfielder Kerman Pannu (pictured below) was second in the scoring charts, hitting five goals and two assists. 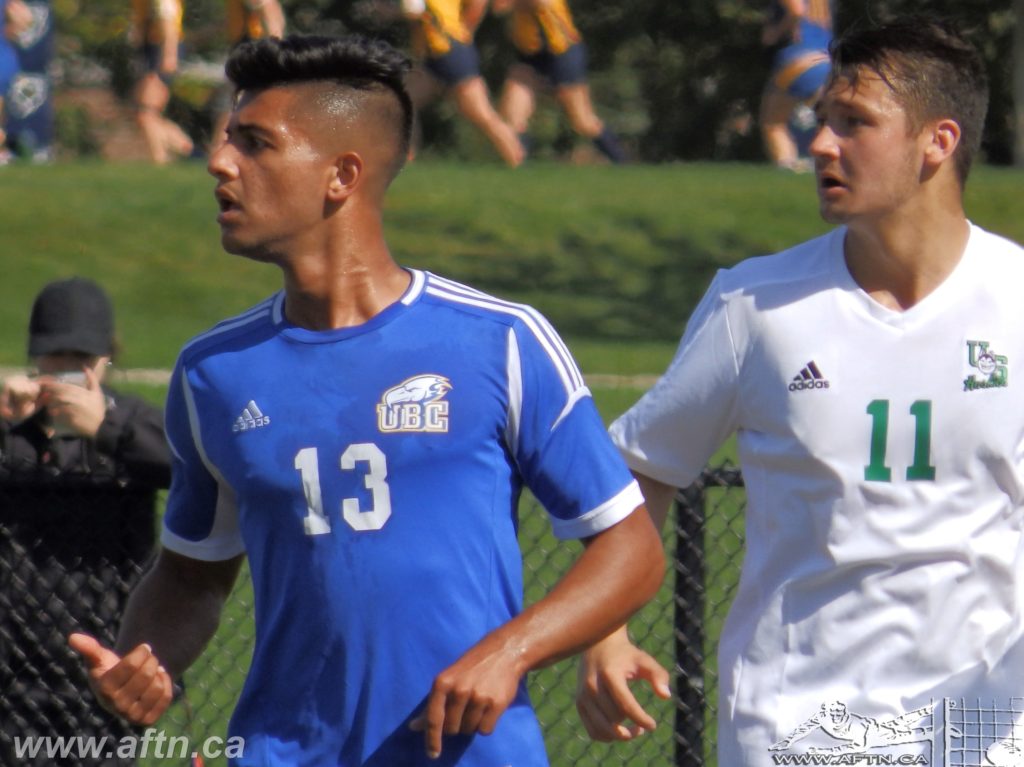 Rookie forward Zach Verhoven led the team with seven assists, and also had four goals to his name. In total, 11 players found the scoresheet for the Thunderbirds, with nine adding assists as UBC finished the regular season with a 10-1-8 record. 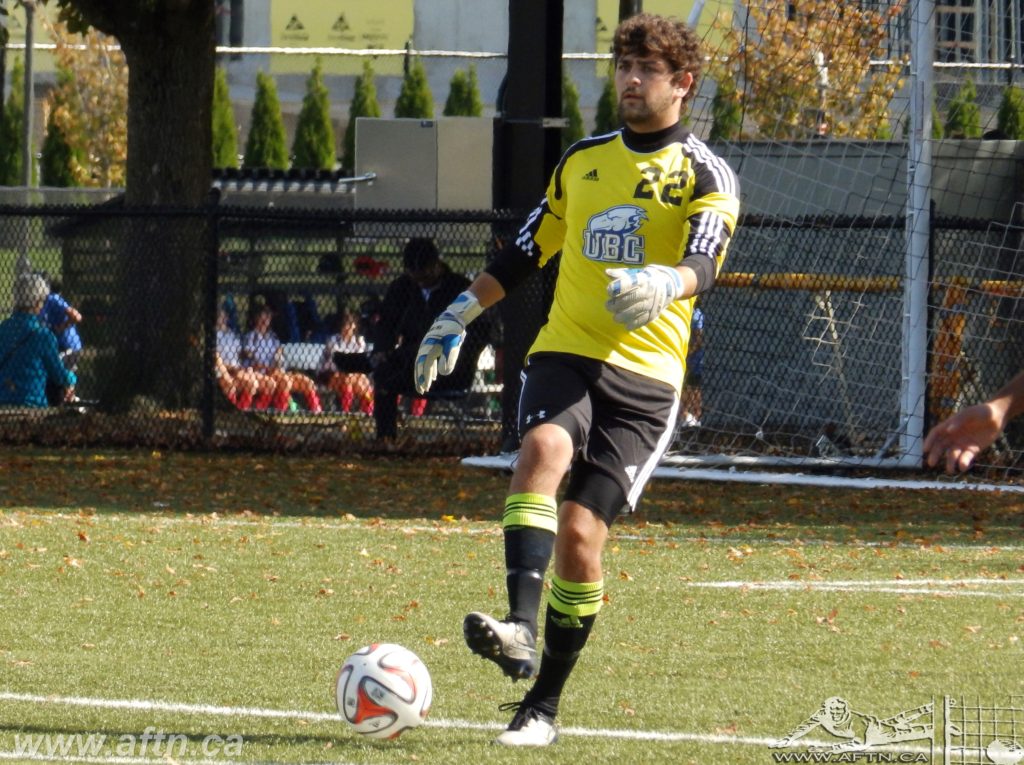 The Thunderbirds Pacific Conference title set up a home Canada West quarter-final with Lethbridge Pronghorns, the only team to beat UBC during the regular season. Another shock seemed to be on the cards as Lethbridge took a 1-0 lead into the half, but a Chopin penalty just past the hour mark and Mackenzie Cole’s winner seven minutes from time took UBC through to the Canada West Final Four and a semi-final meeting with Calgary Dino’s at Edmonton’s Foote Field.

Chopin, Manpal Brar, and Verhoven had UBC three up and coasting by the 57th minute, and although the Dinos pulled one back with 21 minutes remaining, UBC held on with ease to clinch a place in the Nationals and set up a Canada West Championship game with the number one seeded Alberta Golden Bears.

Trailing 1-0 at the half to a 7th minute goal (assisted by Whitecaps Residency alumni Tim Hickson), UBC levelled six minutes into the second half through a Cole header, and with no further goals during normal or extra time, the game headed to penalties, with UBC losing out 4-3 after seeing one spot kick saved and another blasted over.

Mike Mosher’s men now head to the Nationals as the 5th seeds and will play their quarter-final with RSEQ Champions Quebec A Montreal Citadins at 1pm PT on Thursday as they seek their 13th CIS Championship.

You’ll be able to follow all the action in the online stream HERE.

UBC’s women head to Nova Scotia in search of back to back national titles and their 7th CIS Championship overall. 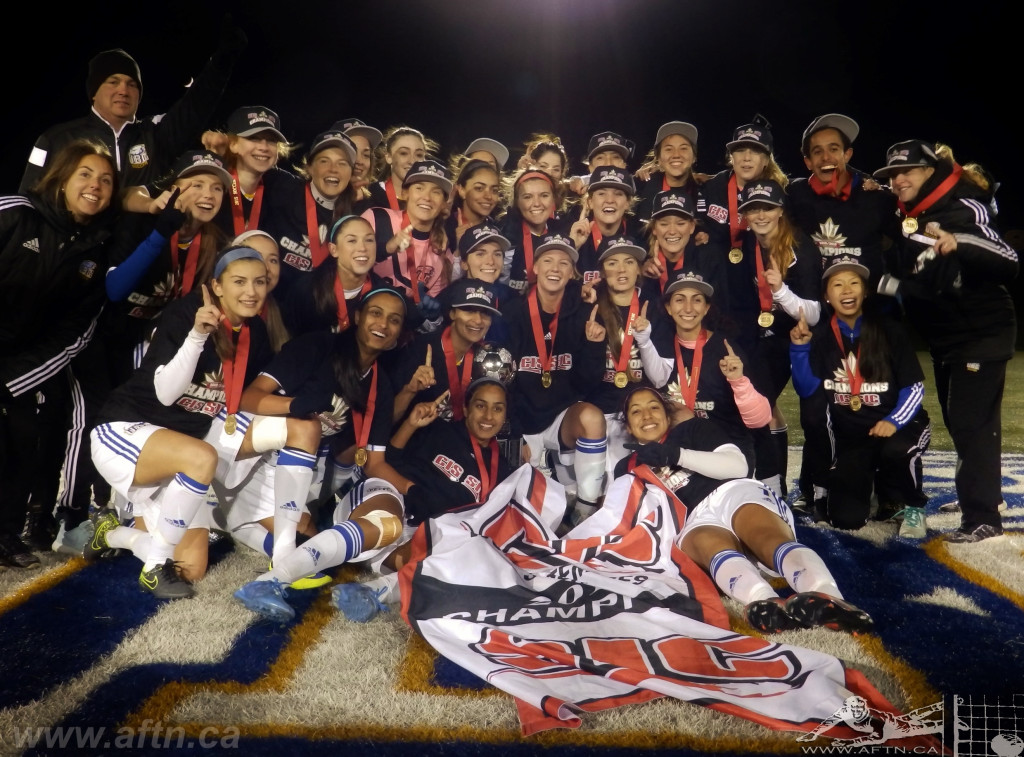 After last year’s record-breaking Championship win on home turf, UBC had a mixed year under new head coach Jesse Symons, but have saved their best form till it matters most.

It was a tough regular season for the Thunderbirds women who finished fourth in the standings in Canada West’s Pacific Division with a 6-3-5 record, 13 points back of Conference winners Trinity Western. Whitecaps alumni Jasmin Dhanda led the way with 16 goals and 8 assists.

Heading back to the nationals looked a tall order for UBC. Even more so when they were 2-0 down at half time of their quarter-final match up with Alberta Pandas. They needed a star and they found her in Aman Shergill, who left the Pandas rather fittingly with two black eyes. The fourth year defender was moved up front and hit a stunning 15 minute hat-trick to give the Thunderbirds a 3-2 win and move them to the Canada West Select Six.

UBC then found their groove. Three games, three wins, no goals conceded, culminating in a shock 3-0 win over Trinity Western in the Championship game and the Thunderbirds were heading back to defend their national title as number one seeds.

They kick off their defence at 3.30pm PT against the 8th seeds, AUS finalists Acadia Axewomen. As long as they don’t have Lizzie Borden in their line-up, they should be fine.

You’ll be able to follow all the action in the online stream HERE.