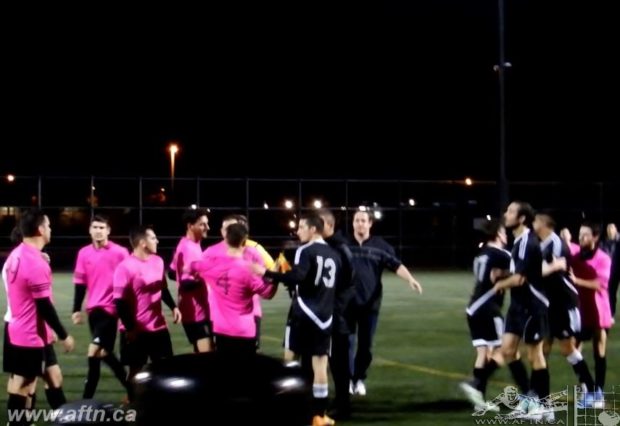 Another week of matches, another win for Coquitlam Metro Ford Wolves, and another increase in their lead at the top of the VMSL Premier.

But while it’s becoming something of a procession at the top of the Premier, the fight for positioning, Provincial Cup places, and relegation spots is continuing to be fiercely tight throughout the rest of the division. Elsewhere in the league, the battle for promotion places is heating up in Divisions 1 to 2, with some good action this past week and a lot more to come.

If you were wanting to put money on Coquitlam Metro-Ford Wolves results right now, a smart bet would be for a 3-0 win, but certainly a clean sheet. Coquitlam racked up a second straight 3-0 victory and their fifth straight shutout to see off North Delta SC on Saturday. Lucas Krivak grabbed a brace and Carlo Basso notched his seventh of the season.

The win made it eight wins from eight and extended Coquitlam’s lead to nine points, with a game in hand.

The chasing pack behind them bunched up considerably, with a point separating the teams in second to fifth place.

West Van lost 2-1 on Friday night to a spirited performance by Croatia SC, who fought back from going behind to an early goal to claim the three points at Burnaby Lake. West Van had looked strong in the opening exchanges and could have gone two up but saw an effort crash off the post. After that Croatia were in the clear ascendancy, tying things up before half time then taking the lead in the first ten minutes or so of the second half when they capitalised on a defensive error between keeper and defender to fire home a 30 yarder into an empty net.

We took in the closing stages of the match (one of three we caught part of on Friday night, providing further proof of how shit my camera is at shooting night games, as you will see!) and West Van pushed hard for the equaliser, crashing a close range shot off the crossbar in the final ten minutes, but they couldn’t find a way through and dropped three big points. The win took Croatia out of the bottom two and will give them a big boost in confidence moving forward for the rest of the season. 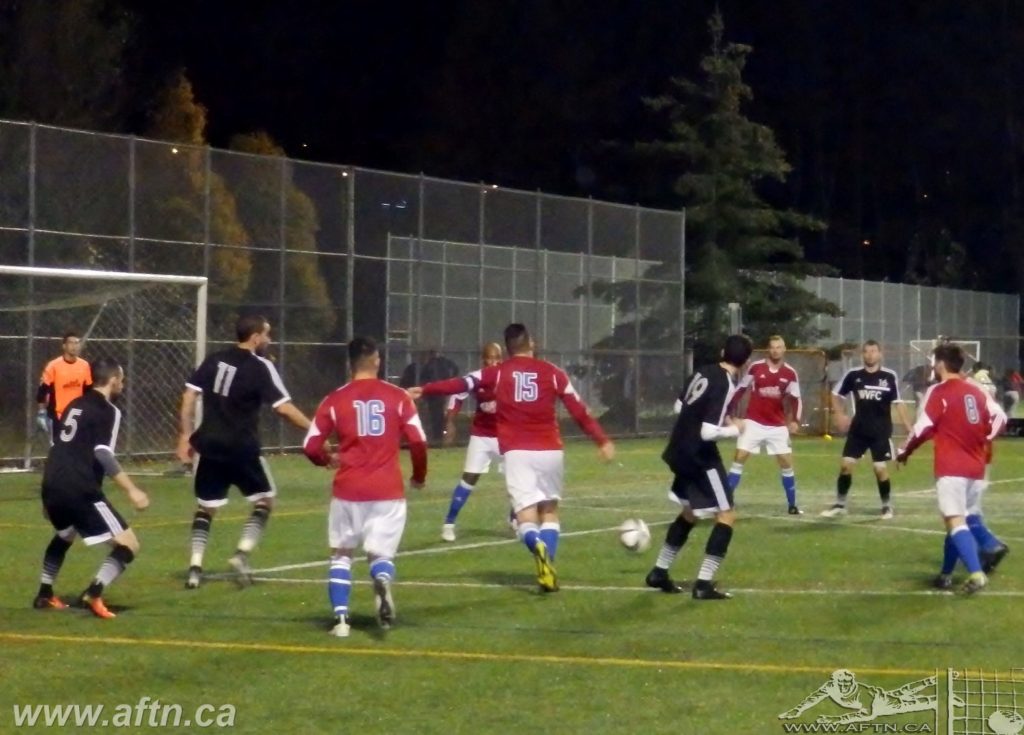 Rovers Tigers United are third, tied on 15 points with West Van, after a 3-1 home win over EDC Burnaby on Friday night with goals from Muhammed Aburub, Cam Hundal, and Harpreet Khakh. Club Inter also sit on 15th points in fourth place after a 2-1 win over Westside on Sunday, thanks to a brace from Colin Streckmann.

All of that leaves the VMSL Premier Division standings looking as follows after Week 9. 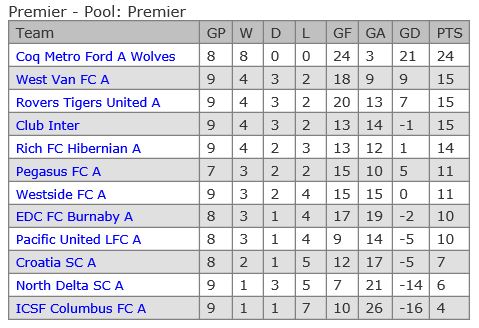 While the Premier title already looks to be in the bag for the defending champions, the race for the Division 1 title and promotion has heated up considerably these past few weeks. With only four points separating the top eight sides, it’s all to play for over the remainder of the season and which two clubs will end up going up is anyone’s guess right now.

There’s new leaders in the division as well, with Rino’s Tigers getting back to form and taking over the top spot following a 2-0 win at home to Metropolitan. The victory moves them level on points with CCB Guildford and Binger’s Army, with a game in hand now on both.

Last week’s leaders Guildford drew 1-1 with Rino’s Vancouver on Friday night, with Binger’s drawing 1-1 with the third Rino’s team, the Fury, on Sunday. Guildford and Binger’s then met at Memorial South on Wednesday night in a Week 10 clash, with the Army lads coming away with the 2-1 victory.

It’s also something of a logjam in Division 2A and especially Division 2B right now. 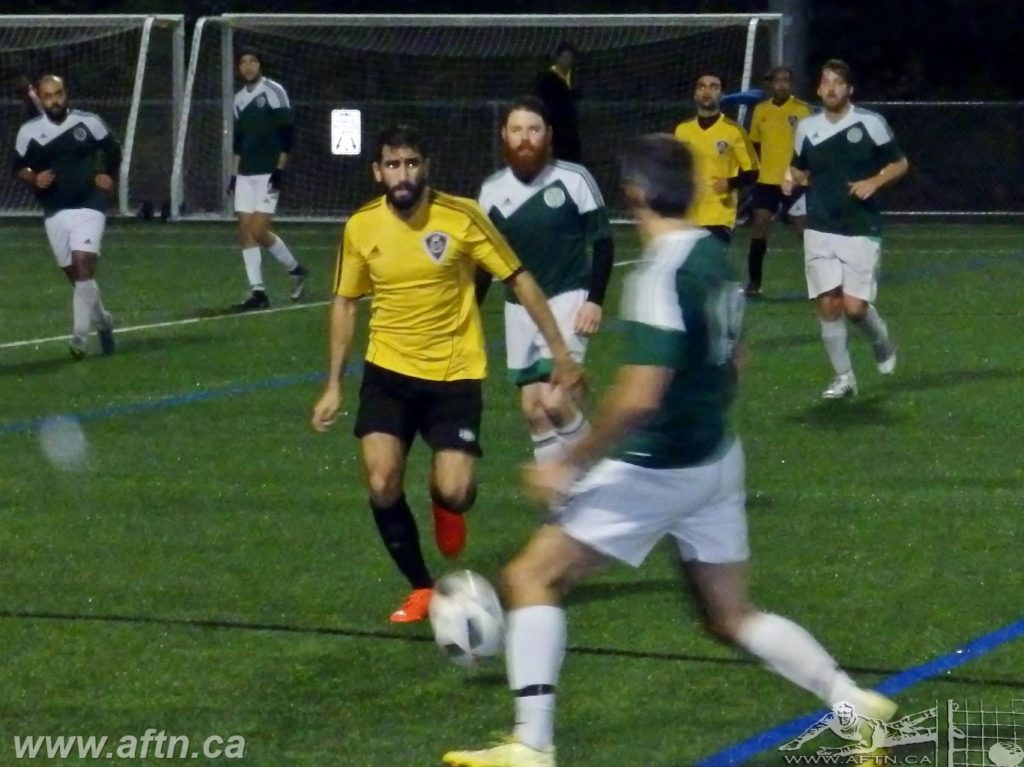 Burnaby Metro Athletic are seeking back to back promotions and moved to the top of Division 2A after a 4-2 win in an entertaining game against Twin Arrows at Burnaby Lake on Friday night, in what was our featured match of the week.

Burnaby took a 1-0 lead into half time in the wet conditions and added a second just after the restart. But full credit to Twin Arrows who never gave up and fought back to make it 2-1 from a deflected effort from just outside the box.

Both teams pushed forward but it was Burnaby Metro who re-established their two goal lead after a lovely goal that started from a throw in, had some nice touches along the way, and ended with a crisp finish into the bottom corner.

Twin Arrows reduced the deficit to one again soon after, looping home a loose ball from a corner, before former Whitecap, and UBC standout, Navid Mashinchi wrapped up the scoring with the goal of the game, collecting the ball in his own half before powering through on goal and firing home from just inside the box.

You can see the last four goals from the game in our video below:

Previous leaders 13th Legion fell to second, two points behind Burnaby, after a surprising 1-1 draw with NK Hrvat, also at Burnaby Lake on Friday night. We only saw the last five or so minutes of the match, so not entirely sure what went on, but from what we could gather, Hrvat took an early lead, the Legion tied things up in the second half, and despite pushing hard and controlling possession, they couldn’t find a breakthrough.

What was evident was a lot of niggle between the two teams and it boiled over at full time with a lot of pushing, shoving, verbals, and handbags (as you can see in our blurry main photo!). The next match between the two sides could get interesting.

Burnaby Athletic and 13th Legion meet November 18th, in what is set to be a cracker and worth getting out for.

In 2B, two points now separate the top six sides. Shaheen still lead the way on 17 points despite losing 1-0 at home to Burnaby Select White Eagles on Sunday. That win moved the Eagles up to third place, one point behind the leaders. Gastown FC sit second, also one point off the top, despite also losing 1-0 to NVFC Norvan Storm on Friday night, who are now fourth on 15 points. Bombastic and Harps are the other two teams in the promotion mix right now.

No-one seems to be able to put together a string of results and pull ahead in the division, and that should make for a fantastic couple of months to close out the season.

Division 3A is shaping up into a tight three horse race. America FC lost top spot after their second straight draw, this time 1-1 at home to Ante Up United. They remain unbeaten this season but it allowed Royal City SC and Westside FC Juniors to leapfrog above them in the standings after 6-1 and 9-0 wins respectively.

Bosna SC keep their narrow lead at the top of 3B following a 3-2 win over Siaron on Sunday. Cliff Senior Cobra are still breathing down their neck, three points back but with a game in hand, after a 9-0 hammering of Cosmos FC. If Cobra win their game in hand they’ll take over the top spot.

The top two in 3C met at Memorial South on Saturday afternoon, but any expected fireworks were extinguished in the sodden conditions with leaders Coquitlam Metro Ford Lupi playing out a 0-0 draw with West Coast Celts to keep their six point lead the top, although the Celts have a game in hand.

There’s a lot of good VMSL action around the lower mainland this long weekend. You can find the full schedule HERE, so get out and see some of the games if you can.