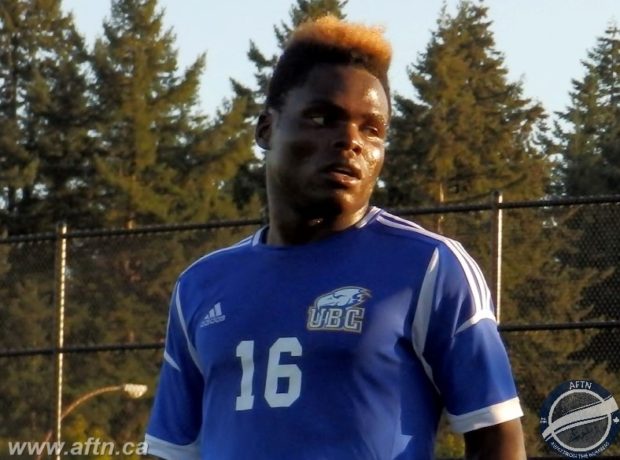 Things were going really well for Victory Shumbusho in his rookie season at UBC last year. The Whitecaps Residency alumni had been named Canada West Rookie of the Year after his seven goals in 10 matches had taken the Thunderbirds to another Conference title. But then injury struck, first during the regular season, and then exacerbated at the nationals.

It was an injury that was to keep him out for nearly a year, but the young striker is back, raring to go, and in some fine goalscoring form once again as UBC get set to host this year’s U Sports Men’s Soccer Championship.

“Having the season I had last year, I was pretty happy with it, but the injury really took me off track,” Shumbusho told AFTN. “I wasn’t able to train for almost 11 months. Being with the team and knowing we had such great talent coming in, it was going to be hard getting back into the team.

The injury was worse than first thought, and it lingered, with the UBC medical staff struggling to find the solution to it. Frustrating for all concerned, but especially Shumbusho, who had been in some of the best form of his fledgling football career.

“The injury was my groin, both sides of my groin,” Shumbusho explained. “I had the problem beginning at the Whitecaps. It healed on the right side, but then the left side started too. When I came here to UBC, as the season went on it got worse and worse, and then by the nationals in Kamloops, it was very cold playing in the snow, it just wrecked it.

“After that I wasn’t able to play the very last game at nationals, so from there I had to take off 11 months. I did a bunch of rehab, injections, which didn’t really help much, till the last one I just did before the preseason that actually had a positive result to it.”

The injury derailed more than Shumbusho’s playing time with the Thunderbirds, it also completely made this summer’s PDL season a write off. The striker was lined up to be a key part of TSS Rovers’ attack, but with the injury dragging on for longer than anyone expected, Shumbusho was forced to miss the whole campaign.

“I was in contact with the TSS coaches basically every week,” Shumbusho told us. “Just to update them and stuff. I was signed with them, I was on their roster, but the injury just kept me out of it. It was very frustrating because I could have been playing with the best players across the universities here, but I couldn’t. It was really frustrating because my mates are playing and I was just sitting around for 11 months.” 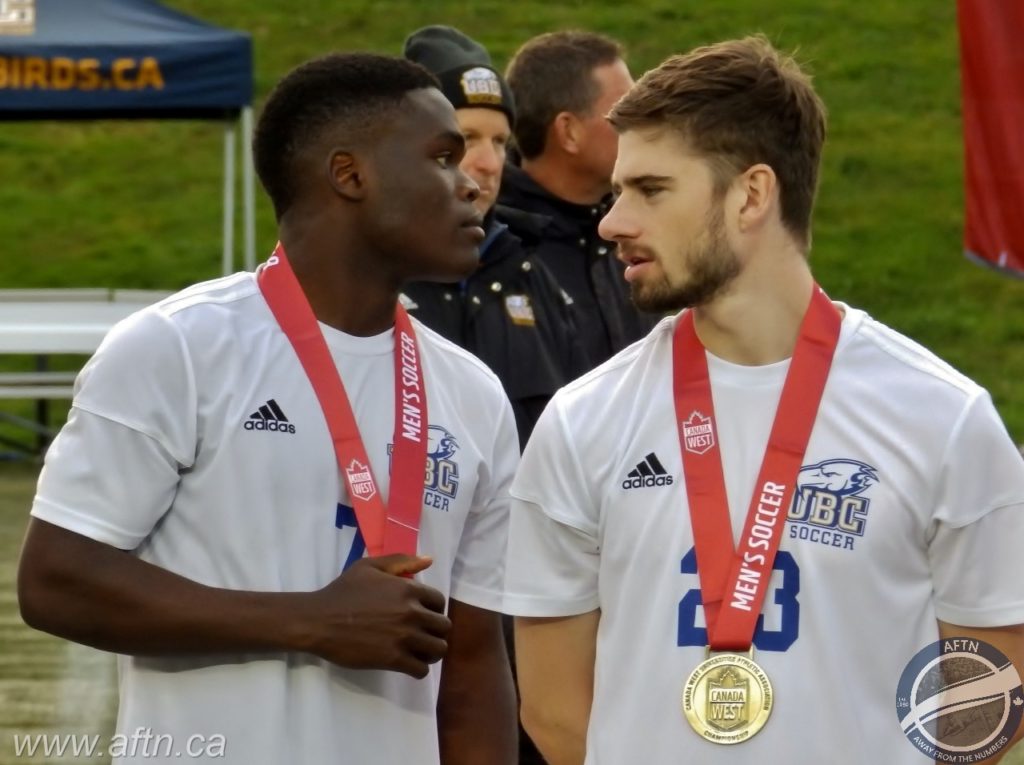 But that’s all in the past now. Shumbusho is back fit, healthy, and raring to go. Back in the starting line-up and back to scoring goals.

UBC head coach has brought the striker on slowly, with an eye to this week’s nationals. Shumbusho made eight appearances down the stretch of the regular season, starting just three matches. He hit three goals and grabbed one assist, and was finding his shooting boots once again.

He’s taken that form into the playoffs, hitting a further three goals and one assist in the UBC’s three games on their way to winning their 19th Canada West title last weekend.

His return to form and full fitness couldn’t have come at a better time for both player and team, with Shumbusho making up a highly potent UBC attack that features the 13 goals Kristian Yli-Hietanen, the 9 goal Caleb Clarke, and 13 goalscorers across the team.

In the rich vein of goalscoring form that the Thunderbirds are in, they should be a major threat to every team at this week’s U Sports championship.

“Definitely. This is one of the strongest attack I’ve ever played with,” Shumbusho enthused. “So many skills, so many guys looking to hand down the ball, so many guys looking to score goals, assisting goals. I feel that if everyone just does their part right, everything should just come good for us. It’s not going to be easy. It has to be everyone putting down their head and working straight, game in, game out.

“Keep on taking care of their buddies, because injuries could now start coming in. It’s getting cold outside. It’s almost the end of the season now and we’ve been playing back to back games, training. So we just need to take care of ourselves. We have one of the strongest attacks in the league for sure. Now we just have to perform and put that on the field.”

UBC are hosting the U Sports Men’s Soccer Championship for the first time since 2007, as they look to add to their already record-breaking 13 national titles. They’ll certainly be one of the favourites to lift the trophy come Sunday afternoon, kicking off their campaign against Carleton Ravens on Thursday night.

They’re sure to be roared on by a passionate partisan crowd and playing for the national title in front of family and friends should give Chilliwack’s Shumbusho, and all of his Thunderbirds teammates, a massive boost.

“It means a really great deal for everyone in the team,” Shumbusho said. “Personally, it means a lot. It’s like a dream come true. Playing in front of big fans, family, coaches, even my teammates. Enjoying the game here. I know it’s nationals and I hope the honour we’d bring by just winning it on our home field, with our fans watching it, that’s a really big deal. Personally I’m going to put every thing in it to it to make sure we get our hands on that trophy.” 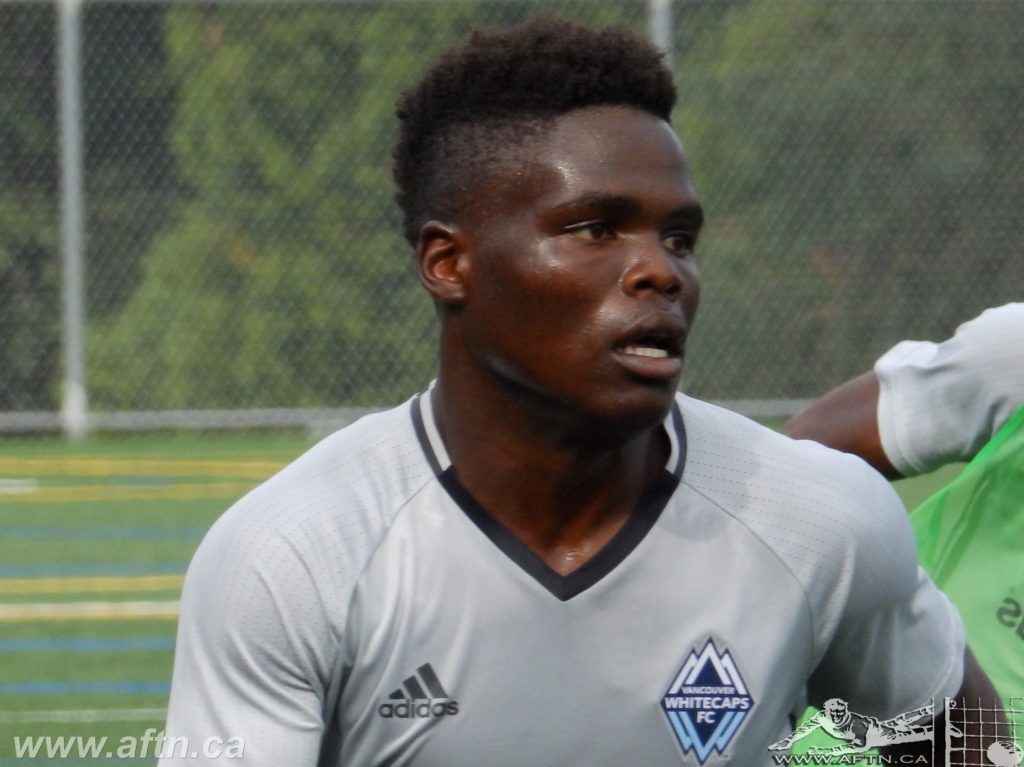 Shumbusho is just at the start of his college career. The second year striker still has three years of eligibility left with UBC. He seems a prime candidate for the upcoming CPL draft. A young talent that wants to play pro, but also providing him the chance to finish his degree. For now, he’s not thinking too much about it all and just wants his play on the pitch to do all the talking for him.

“Playing pro is one of my goals,” Shumbusho admits. “A goal that I am still pursuing and chasing. I know that’s one of my possibilities, but right now I’m just trying to focus on my performance. My physical shape and staying well conditioned game in, game out. I’m just going to play, try my hardest, and hopefully my performance on the field will speak for me during nationals.

“If I start worrying about it, I won’t have the right mindset for focusing on the game. So I’ll just play, focus on my mental skills, physical condition, and just go in and play my hardest and hope for the best.”