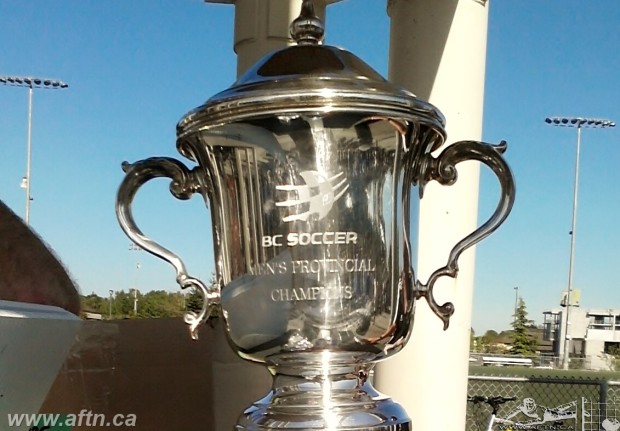 Another weekend of Provincial Cup action is in the history books, with First Round matches in both the ‘A’ and ‘B’ Cups producing a lot of goals and talking points, with a couple of surprising results along the way.

AFTN was out and about in the lower mainland over the weekend, as always, to bring you videos, photos and reports from a number of matches.

Both the ‘A’ and ‘B’ Cups look wide open right now, but VMSL Premier and Imperial Cup champs Coquitlam Metro-Ford Wolves are looking like the team to beat in the ‘A’ Cup, as they look to claim their first Provincial Cup title since 1999.

They kicked off their 2016 quest with a re-match of last month’s Imperial Cup final against West Van on Friday night. It was always going to be a close affair and it took a single goal to split the teams, with former Vancouver Whitecaps draft pick Jovan Blagojevic doing the damage in the 64th minute.

The Wolves will face a very familiar foe in this weekend’s quarter-finals, fellow VMSL’ers Surrey United Firefighters, who are looking to lift their first title since their back to back successes in 2012 and 2013.

Surrey also needed just a single goal to make it through their First Round match-up, seeing off FVSL UPL runners-up Port Moody Lordco Gunners 1-0 on Sunday afternoon thanks to a Sean Einarsson effort.

Right now, it’s looking like Coquitlam are on an ‘A’ Cup final collision course with VMSL Premier runners-up Pegasus FC. The Wolves pipped Pegasus to the title by a single point, with only a single goal between them as well over the season (70 to 69).

Pegasus got their 2016 Provincial Cup campaign off to a thunderous start on Saturday afternoon, hammering VISL Division 1 runners-up Comox Valley United 5-1 at Newton Athletic Park, but they were made to work hard for the win.

Azad Palani gave the Surrey side a 1-0 half time lead after an 18th minute goal. Chetan Jhooty doubled Pegasus’ lead six minutes after the restart before Graeme McNeill pulled one back for the islanders in the 71st minute. As Comox pushed for the equaliser, the VMSL side hit them hard, with three goals in the final ten minutes.

Whitecaps Residency alumni Mark Baldisimo made it 3-1 in the 81st minute, before Jhooty added his second, and Pegasus’ fourth, three minutes before full time. Baldisimo grabbed his second, rounding off the scoring, in stoppage time.

Pegasus will now host another island team in the quarter-finals after Nanaimo United surprised Saanich Fusions Maude Hunters on the Tyndall turf in Victoria on Saturday night.

It took penalties to decide the all-VISL match up, after a blistering game finished 3-3 after extra time. Daragh Fitzgerald hit a brace for Nanaimo, with Mateo Kostering getting the other, while Andrew Celenza struck twice for Saanich along with Cardin Davis.

Nanaimo shot out to an early 2-0 lead and were looking comfortable before Saanich struck twice to force extra time. Both teams scored in the extra period, sending the match to penalties, which Nanaimo won 4-3 after missing their first spot kick. Nanaimo goalkeeper Scott Samuelson saved two of Saanich’s penalties.

You can see video of the full penalty shoot-out below:

The other all-island First Round clash saw a repeat of this month’s Jackson Cup final, as VISL double winners Cowichan saw off Bays United 3-1 in Duncan. Cooper Barry, Keevan Webb and Joshua Cuthbert got the Cowichan goals, with Jack Hill getting Bays’ counter.

Cowichan now host 2014 ‘A’ Cup winners Croatia SC in the quarter finals after the VMSL side came through a wild one 5-4 against Abbotsford United, after extra time.

You can see a photo gallery from the Club Inter – Pacific United game over on BCsoccerweb.com.

The quarter-final line up is now set and will feature five VMSL sides, two VISL teams and one FVSL club. The full quarter-final draw is as follows.

Kick off times and venues will be updated on the BC Soccer website HERE. With both the Whitecaps’ MLS and USL teams out of town this weekend, it’s a great chance for you to get out and support some local soccer.

You can read our Keith Millar ‘B’ Cup round-up, with more videos, photos and reports, HERE.