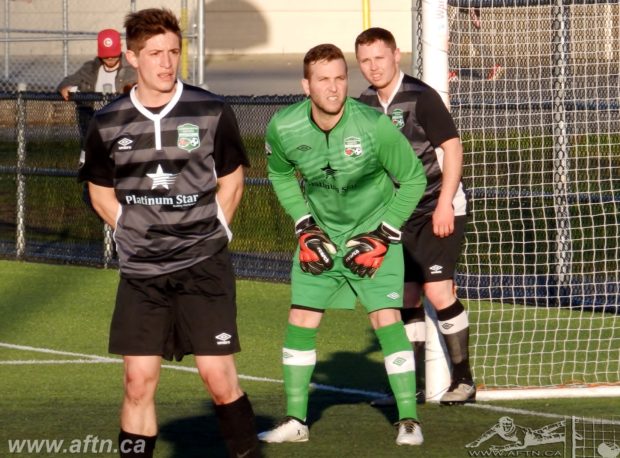 It’s already been an amazing year for TSS FC Rovers and Aldergrove United midfielder Connor Hildebrandt, and there’s still a lot more to come as he gets ready for the biggest weekend so far of his fledgling footballing career.

The talented 20-year-old helped guide Aldergrove United to a Fraser Valley Soccer League (FVSL) Premier championship, leading the team in scoring with 14 goals and winning the League’s Player of the Year.

Hildebrandt will be pulling a double shift this weekend, making his PDL debut for TSS Rovers at Swangard on Friday night before taking the pitch for Aldergrove United in Sunday’s BC Provincial A Cup final at Burnaby Lake.

His hat-trick in Aldergrove’s quarter-final win over Bays United and the crucial third goal in their semi-final win over Westside took Aldergrove to their first ever Provincial final, and they stand on the verge of making history as the first FVSL side to lift the trophy in the tournament’s 95-year history.

“We were saying in the dressing room, none of us ever dreamed of it,” Hildebrandt told AFTN as TSS training this week. “At the beginning of the season, we set a goal to win the league and we set a goal to go further in the Provincials than we did last year, which would have been the semis this year. So obviously getting a step further than your goal is a good feeling.

“I never would have thought a few years ago playing for Aldergrove that we would have been in a Provincial Cup final, but we’re ready for it, we’re looking forward to it, and we’re not going to get caught up in the moment. We work for each other.”

That team chemistry is clearly evident if you watch Aldergrove play this season and it’s something that Hildebrandt feels will see them over the line in Sunday’s final.

“It’s probably one of the best teams I’ve been a part of,” Hildebrandt added. “In terms of the dressing room, in terms of the training, everybody working hard and staying after for extra work, and literally just fighting for each other. If we keep up what we’ve done for the last year, and even into last year too, I think we can do it.”

If they do, it will be a landmark win for both Aldergrove and the FVSL, after years of the league being seen as second rate compared to the vastly more successful VMSL. It’s certainly something that irks many in the valley soccer community. Hildebrandt believes that we may be seeing the start of a shift in BC soccer, but he feels no added pressure from it heading into Sunday’s final.

“I feel that the gap that there’s been in recent years has been closing and I think we’re evident of that,” Hildebrandt told us. “I’ve played in both leagues. VMSL with Surrey United Firefighters and Fraser Valley with Aldergrove. I think what the Valley’s got over the VMSL is what I talked about earlier. That team atmosphere, that team spirit. Fighting for each other and putting in the work.

“We’re not afraid to grind but we’ve also got guys who are extremely technical and can play with the ball at their feet. In terms of representing the league, it’s a big step considering the history, but we’re not really focused on that. We’re focused on how we play our game. It’s one more step at a time.” 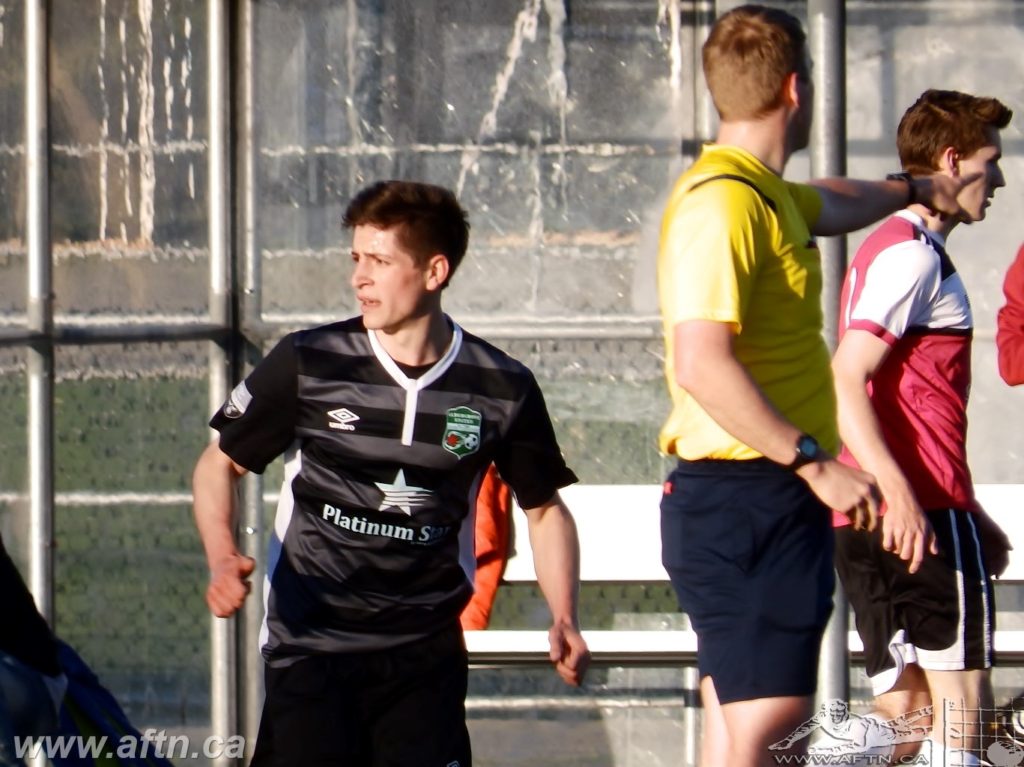 Winning the cup is all the motivation Aldergrove need for Sunday, but with this year’s Nationals for the Challenge Trophy being held out in the valley in Langley, does that give the team an even extra boost to get the job done and represent as winners on almost home turf?

“Yeah, of course, of course, that’s extra motivation,” Hildebrandt said with a grin. “It’s in your back yard.”

There may be two spots allocated to BC teams anyway going by previous years, which could see both this year’s finalists, Aldergrove and Club Inter, represent BC. But that’s not confirmed, so the FVSL side want to make sure that they’re there in the best way possible, as Provincial champions.

“If there is two spots, fantastic,” Hildebrandt added. “But we’re going to ensure that on Sunday.”

Hildebrandt talked about the excellent chemistry and camaraderie within the Aldergrove team, but it’s also evident off the pitch as well with the team capturing the imagination of the local community. A crowd of 600 or so turned up to see their 3-1 win over Westside at Aldergrove Athletic Park on Saturday (which you can see our highlights of HERE). It was a fantastically charged atmosphere throughout the match, so are they expecting a number of fans to make the short trip south to Burnaby for Sunday’s final and recreate it again?

“I think so,” Hildebrandt said. “There’s a lot of guys that haven’t had a lot to cheer about the past couple of years so I think those guys are starting to come out and you’re starting to see them and hear them a little bit more the better we do.”

And it’s certainly a family club at Aldergrove. Hildebrandt’s dad Rob is the head coach of the team, which must be tough at times, depending on how he plays!

But before Hildebrandt’s thoughts can fully turn to Sunday’s final, there’s the no small matter of him making his PDL debut for TSS Rovers on Friday night against Lane United.

The midfielder was forced to miss TSS’ first two matches in Calgary due to a clash with Aldergrove’s semi-final with Westside on Saturday night, and a demand from the FVSL that he play in that tie. He was gutted to miss the games, but he’s raring to go and see his first ever PDL action against Lane.

“I can’t wait to get started,” Hildebrandt enthused. “We’ve put in hard work the last four or five weeks. I’m looking forward to seeing it first hand on Friday night. Playing at Swangard. It’s probably the best pitch in BC, so looking forward to it.” 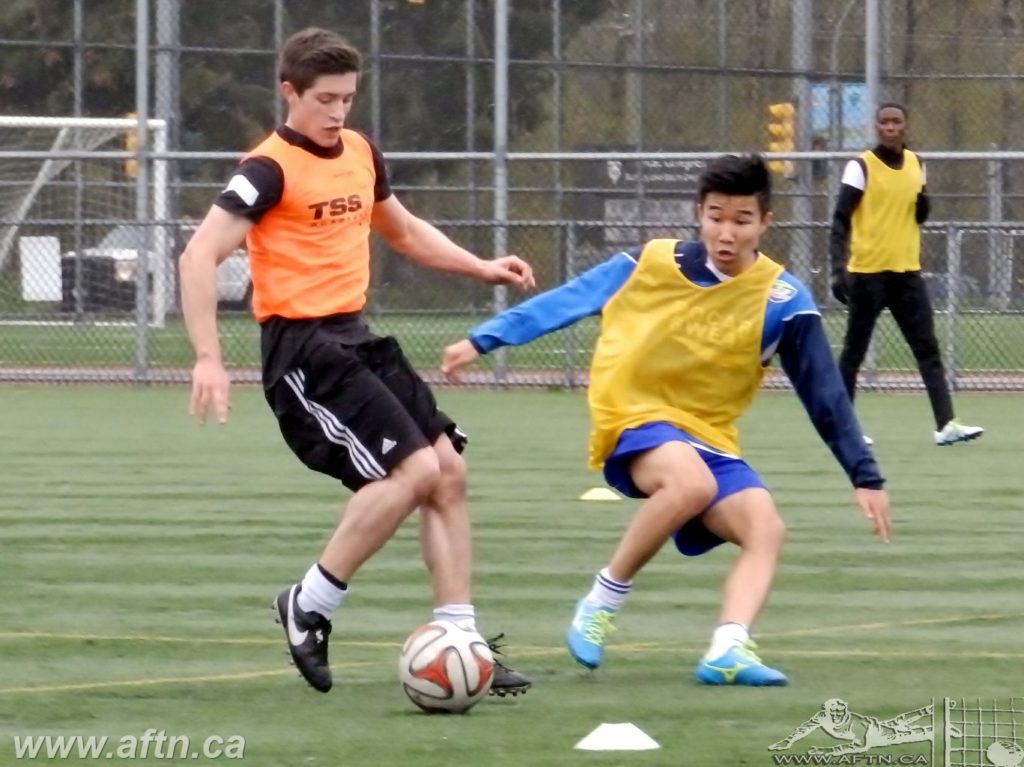 After watching the two Calgary games from afar, Hildebrandt feels the team gave a good account of themselves considering the toughness of their opponents and the lack of time they had to get themselves together as a team for the games.

“I think we did well,” Hildebrandt feel. “Obviously that first half we were in a bit of dreamland. The tough part though is not knowing each other’s tendencies. Not playing with each other that much. When you gel as a team, you know each other’s tendencies more. You know who to rely on, who to play, and in certain situations, where to play.

“Having said that, we started off the game with that underdog motivation. That fire in your belly. Going out against Calgary, who almost won the whole PDL last year, helped us get those three goals early.”

Running out on the Swangard grass will certainly be a buzz for a number of the TSS players who know the stadium’s history in local soccer well. Hildebrandt himself is very familiar with the stadium, in more ways than you can maybe imagine.

“I watched the ‘Caps when they played [there], I watched the U20 World Cup,” Hildebrandt told us. “Actually last summer, when I was doing a bit of construction work, I did a bunch of work around Swangard. Digging up the electrical and all that. It’s a bit funny, I’d dream about playing on this pitch and now I get to.”

TSS Rovers are providing a much needed outlet for local soccer talent like Hildebrandt. It’s the first time there’s been a PDL team in the lower mainland for three years after the Whitecaps closed down their U23 team when they formed WFC2.

Now there’s another outlet for these young BC guys to show their talents to clubs throughout Canada, North America, and maybe even beyond, providing them with opportunities that could take them to a higher level still.

“It’s huge,” Hildebrandt said of what having a team like TSS here now means to the players. “Everybody says we’ve got the talent here. Other clubs in MLS, they like to draw players from other provinces. I can’t quite see why. Even playing in Europe.

“We have the talent here, it’s just that there’s nowhere for everybody to go. Having a PDL team in the lower mainland is going to help fill that gap and hopefully it’s just a stepping stone from there.”

The TSS management would love for the team to be a showcase for players to move on to bigger and better things. You can be certain that the Whitecaps, for one, will be watching the local talent closely, and with the Canadian Premier League starting up, there will be more opportunities than ever before for Canadian players to have a professional football career in their own country.

We certainly hope that Hildebrandt is already on the ‘Caps radar after the season he’s just had. He was before, with the midfielder almost joining the Whitecaps Residency program in 2012.

“When I played with Surrey United U16 in the BCSPL, after that season when we won Provincials and Nationals and all that, I got the offer to be part of the Residency,” Hildebrandt revealed. “But that same summer I also had the offer to go and play in Italy.

“For me, my dream at that moment in time was always to play in Italy. At that point in time, do you follow your dream or do you what you’ve always done and stay here. I didn’t want to have any regrets, so that’s how I weighed it out.”

That was certainly an opportunity not to be turned down, and he’s used the experience from that to help develop his game and take it to that next level. TSS head coach Colin Elmes described Hildebrandt to us as almost a “late bloomer”. Those that have watched him from the age of 5 in the local parks saw his talents early.

The FVSL season has helped him reach a potential pinnacle in local soccer, and now TSS provides Hildebrandt with the opportunity to showcase it on a national level, with his ultimate dream still to become a professional footballer.

“One thing I’ve learned is that in football you can’t plan too far ahead,” Hildebrandt mused. “Things change in the blink of an eye. My ambition is to be a footballer. I’ve seen it first hand in Europe and several countries. I know what it takes to get there. I know what it looks like, I know what it feels like. It’s just taking the next step and manifesting that into something tangible.”

Get To Know Your TSS Rovers: Connor Hildebrandt