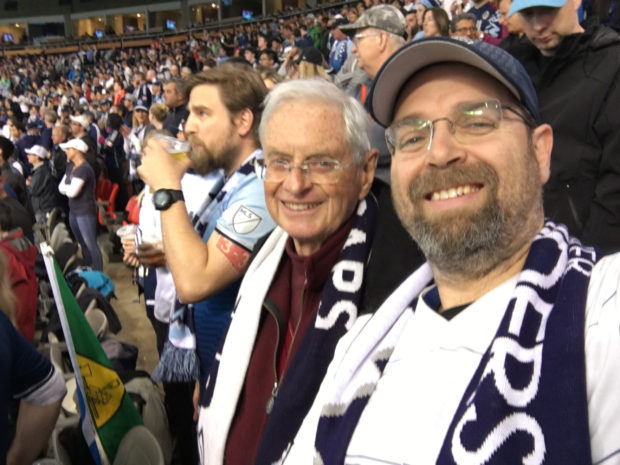 When I was a kid it was my dream to watch Glenn Hoddle and Ozzie Ardiles turn out for Tottenham at White Hart Lane. I lived less than 10 miles from the ground and had a sincere love of Spurs drilled into me through a lethal combination of club success and knuckle-powered peer pressure.

This was the late 1970s and heading to a match in North London was no easy thing. If you were my Canadian father, unfamiliar with football culture and not knowing how to navigate the violence and danger, it would have been intimidating to bring your 10 and 8 year old sons to a match. My dad is a prudent man, a former reserve navy officer and data processing manager. So I never went.

In early 2012, on holiday in the UK with my dad, I had a chance to buy tickets to see Tottenham host Wolves, with a team that featured Gareth Bale and Luca Modric. The tickets were hard to find, but having finally located some through a friend of a friend, we went to pick them up and before I could pay, my dad laid the money down and said “I’ll take you to see Spurs.” It was one of those moments that makes me tear up just thinking about it.

There is something so iconic about fathers and sons together at the football. That day at White Hart Lane was one of the highlights of my life, 35 years in the making, but all the sweeter for that. Last weekend, I had a chance to return the favour and bring my dad to see the Whitecaps. As he lives in Ontario, every day I get to spend with him is precious, and it was a tender delight to have him in the Pigeon Loft on Saturday.

Now, since 2009 I’ve been bringing my kids to the Southside. My daughter – a jazz singer who harmonizes “Victory” – is now old enough to (officially) have a beer with me. My son, with his brilliant footballing intelligence is able to barely hold his shit together most of the time, rivalling our fellow Pigeon Casual Tyson, who has, as we say “higher standards” about the team’s play than the rest of us.

It is almost a ritual now to share my summer Saturdays with these kids. One has moved out and the other is a busy teenage boy, so these few hours we get together, standing and singing for our team are a critical part of how I father now.

Back at Swangard the Southsiders formed in a way as an antidote to the sanitized “family-friendly soccertainment” that the Whitecaps front office were peddling. If you wanted to drink beer and sing dirty songs and swear and generally carry on, you weren’t going to do it in the grandstand, where little kids spent more time adoring Spike than focusing on Wes Knight’s long throw heroics or Jay Nolly’s magic hat. Those who wanted to support in a traditional way migrated to the south end of Swangard, to be near the beer and to carry on without interference from the easily offended.

From the beginning there were families in the Southside. When I took my nine year old son to his first match, he saw what was going on in the Southside and that’s where he wanted to stand. That’s what got us into this whole scene in the first place. Not all of us who parent are seeking a quiet and clean upbringing for our kids. Giving them an outlet to be a bit rowdy and rude is a good thing, a fun thing, and well within acceptable parenting guidelines. We let them play in dirt too and hurt themselves a little. It builds character.

To this day, there are many families of many kinds of composition in the Southside. Amongst the Pigeon Casuals alone are fierce youth like Aine and Jess, who set everyone straight about using gendered and homophobic language. We have little kids like Mark who can often be seen hoisting a Cascadia flag that is probably 12 times taller than he is. We have babies in our section, sporting the latest in noise cancelling earwear. We have extended families, and mixed race families and same sex families, all of them cheering, singing, tolerating and participating in shenanigans and not too easily offended by swearing, referee abuse, popcorn fights, or the occasional spilt beer.

We are basically the best family section in the whole place, even if we are perhaps not the best behaved, and every night in the Southside is family night. You won’t find more energetic supporters anywhere from pre-schoolers to pensioners, all there to sing for the ‘Caps.

I suppose you could bond with your children at the museum or the library or the aquarium, and some of us do that too. But there is something special about being at a sporting event with your kids. Something funny about watching dads allow their kids two hours of dirty words a week. Something about participating in the energy and the tifo and the displays of emotional affection for our team. A place where you can yell in public and no one is going to tell you to hush.

If you’ve never brought your kids to join us, and you’re the kind of parent that lets them eat dirt, pop by for a bit sometime and see what it’s all about. It’s probably a bit different from what you’ve been led to believe.

Last Saturday was sweet. It was sweet to be there with my dad, to introduce him to supporter culture, to share a couple of hours with him. He got it right away, even remarking at the half “you guys need to be louder. I can still hear the drum.” He loved the atmosphere and the game and being there with his son.

And me, I loved the feeling of being there with my dad.