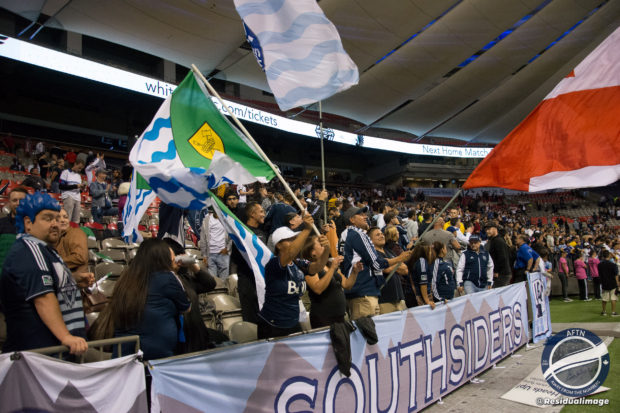 Saturday night up in the Pigeon Loft pre-game, Joel and I were trying out a few of the new player songs we’d made for Bernie Ibini, Yordy Reyna, Aly Ghazal and thinking about what we might get going for Nosa Igiebor and Aaron Maund and Stefan Marinovic. As we were watching the warm-up we were squinting across the pitch and trying to identify all these guys with our middle aged eyes. So many new faces.

Here we were, some of the fiercest and most vocal supporters, and we were stood watching our team warm up with a kind of detached curiosity. Who is this team right now? Who are some of these guys? I wrote about our squad turnover a couple of weeks ago, but I hadn’t noticed how it was affecting things until Saturday. There was a creeping aloofness in Southside. We’re in a kind of holding pattern with this new version of the 2017 Whitecaps, and the new guys don’t yet know what to make of us. The jury’s out. It feels like watching goldfish fall in love.

It’s not that we don’t support our team – and David Ousted was very generous in his thanks on Sunday – but we don’t quite know who we’re going to love next. Ousted and Harvey, Watson and Parker, Techera, AJ and Bola always get our affections. Amongst the younger guys, Nerwinski and Davies have our undying support. But with the others, we either don’t know them well yet or there are complicating factors in providing unconditional support for them.

Perhaps this explains why trying to get the Southside singing in full voice on Saturday was like pulling teeth from a frog. Our version of Boundary Road was tepid and set off enough alarm bells that an ambassador was dispatched from the Southside core to the Pigeon Loft to enlist me to drum for the first half. That’s how dire it was. When Gordie Parenteau took over in the second half, it was a sweet relief. Just like old times.

It is true that we are currently a supporter base that sings when we’re winning, and we are also plagued with structural issues that Zach Meisenheimer beautifully laid out recently (a piece worth a read and a re-read). But that doesn’t explain Saturday’s aloofness bordering on reticence.

We talked about this a bit on the AFTN Soccer Show on Sunday. As a founding member of the #OptimistsUnion I’d like think that what we are seeing is kind of like the calm before the storm. Nine or ten new players this season, none of them really known commodities, and all of them generally working out. The team has climbed the table and stands one win away from first place in the west and yet there is a distinct lack of excitement about this current squad, and I think it’s really down to the fact that we haven’t yet developed a relationship with the new guys.

The home stand this week is a massive chance for our club to establish that relationship (hint to the players…pop over and say hi to the supporters sections post game…). Its also a chance to convert that 98% chance of making the playoffs and 38% chance of winning the Western Conference into inevitabilities.

The match on Wednesday is the return leg of the Røvde Cup, an unofficial designation that the Pigeon Casuals have levied on the fixture to honour our former goalkeeper coach, Marius Røvde. On Saturday, Columbus comes back in the Manneh-Tchani-GAM derby and by the end of next week, I’m hoping we’ll be top of the West and more and more in love with this team.

By then, with a few good home wins under our belt, my deepest hope is for the passion we witnessed in the concourse to make it back to the stands.