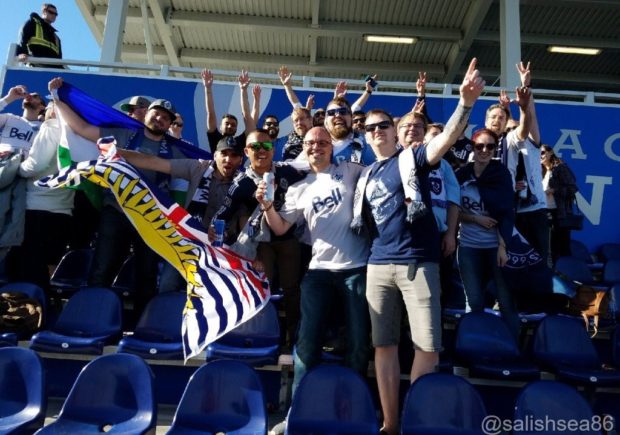 There is no better cure for supporter apathy than a long distance road trip to a bitter rival. While New York City is a great holiday in an incredible city, it’s hard to get the energy up for a dozen supporters – no matter how committed – to really sing against Poku and other players we’ve never seen play for a team we have no history against.

But of course Montreal is different for their history in the Voyageurs Cup against us, and for their MLS and CCL success that has just pipped our own progress by a round in each case. Their supporter culture includes a group of Ultras who are fierce in their dedication and energy in stadium, and better avoided coming to and from the match. High on my list of things to see in any given season is a win against Montreal. Especially sweet is a stake-through-the-heart kind of win.

Take that starting condition and add to that a rag tag supporters section made up of Vancouver ex-pats from Montreal, Ottawa, and Toronto, and a few #CapsOnTour, a group of Surrey boys on a stag party, and maybe a player’s family or two, and you have gathered a group of outsider outsiders. Not only are they already a little counter culture within the Canadian sports world, but within their respective home cities, they are far outliers. There are probably 20 die hard ‘Caps supporters in Toronto, in a city so large, not even that lonely pursuit is enough to be able to cause them to find a venue to watch matches within two hours of someone’s home. So coming to Montreal is a salve and a way to connect to each other and learn the new songs that have popped up in the Southside since they left.

We were maybe 40 altogether, initially occupying some choice rows pitch side to sing for our players during their warm ups and we even managed an improvised section wide banner by holding together Canada, Southsiders, Cascadia, and BC flags. Once the match started and we got off Boundary Road, we were herded by security to the top of the section, which had the advantage of being close to the shed for better projection. Away to our left was the non-Ultra1642 Montreal supporters group and their bell, in what we began calling the Bell End.

Marco Donadel’s early goal ruined our chance to sing “You didn’t ring your be-e-e-ell, ring your bell…” for the clean sheet but it seemed not to dampen our mood at all. There is a resilience that comes with road trips, even against a mediocre opposition. The expectations of the team are much different from those at home, and anyway, we were fuelled with smoked meat from Schwartz’s, poutine from La Banquise, and a flight of pints from Trois Brasseurs, so it was important to keep jumping and singing just to maintain an acceptable metabolic rate.

People who haven’t travelled away often complain that the away supporters at BC Place seem to outsing the home supporters. It’s not wrong, but there is a reason for it. There is a kind of siege mentality and a “don’t give a shit what you think” that comes with being penned in a little corner of the opposition’s home ground. You sing regardless, you sing probably more than you do at home, to be honest. You sing with defiant energy because being a part of a small crowd keeps you going when the fans around you are taunting you, swearing at you and giving you stink eye.

When El Bicho scored the winner for us, the split between the mighty 40 and the rest of the stand became fractured irreparably. We were delirious, witnessing that rarest of events: a meaningful come from behind win on the road against a rival. Stade Saputo fell into a resigned quiet, but for the sliver of joy at the top of section 112. At the end of the match, Hakim Sheriff from 1642 Montreal even came up to trade a scarf and give us props for the support; respect for that gesture. We stayed for 20 minutes before security escorted us to the Métro from whence we adjourned to The Plateau for the evening.

I think the enduring image I am taking from Montreal is Jordan Harvey in the afternoon sunshine with a group of players after the match, his hands pressed together in front of his face in an extended act of both appreciation and what appeared to be relief. The team had gathered in front of us in the east end at Saputo and 30 strong and tired voices showered them with “Victory” and a few choice chants for Jacobson and Waston and El Bicho and Williams, who had all given us a memorable win.

There was a feeling of intimacy and pride to the moment, and although I don’t want to read much into the gesture, it seemed to also be an acknowledgement that the apathy and cynicism that has been sinking into the side and the supporters base has started to get an overhaul. A nascent feeling, a whisper of a deeper sentiment between us, but tangible nonetheless.

Over a season and over the years, support comes in waves. It feels like we’re coming out of something dark now and It feels good to be proud of each other again.