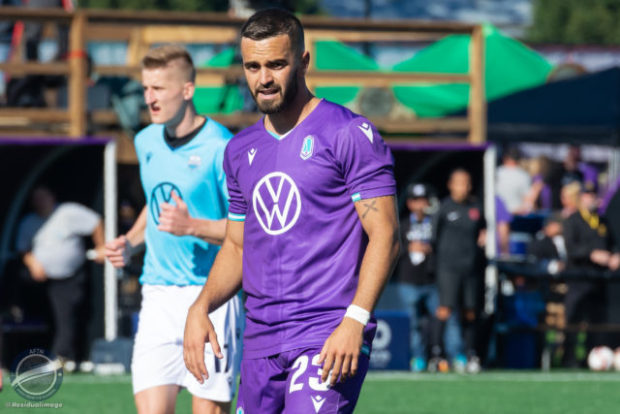 Victor Blasco has called Vancouver Island his home for the last three years. On Sunday, the Spanish winger got to represent it on the pitch in Pacific FC’s first match in the Canadian Premier League.

The 1-0 win over HFX Wanderers meant a lot to many people, but for Blasco it was a tale of redemption after a tough few years that saw the 24-year-old take a step back from the game he loves to review his options, head back to university, and get his footballing career back on track.

A product of the FC Barcelona La Masia academy, Blasco signed a USL deal with Vancouver Whitecaps in 2015. Just over a year later, with four goals and six assists from 24 appearances to his name, he was released a month into his second season for “breaching the club’s personal conduct policy” and his footballing career was at a crossroads.

Three years have passed and now he’s back as a pro. A key part of the Pacific FC’s attack and a player we have marked as one of the potential breakout stars in the CPL during this first season. It’s been a challenging road back for Blasco and one that’s seen him grow in a number of ways along it, making Sunday’s CPL debut all the more special for him.

“It means everything,” Blasco told us after Sunday’s match. “As you know, I was a couple of years away from professional football. Getting back to it was amazing and from here I’m just going to keep going, keep working. It means everything. It’s amazing.”

After his release from the Whitecaps in April 2016, Blasco did a lot of soul searching. He could easily have cut his losses and headed back to Europe. There was some interest from a couple of other USL teams. But in the end he headed back to Nanaimo and back to Vancouver Island University, where he played under Bill Merriman, the father of Pacific FC assistant coach James.

“I had a scholarship,” Blasco explained as to what kept him in Canada. “I felt that people in Canada had treated me very well. It just felt right to stay here and you can see, it worked. So I’m very happy.”

We say back to Nanaimo because the island was where Blasco’s Canadian soccer adventure began. Scouted by then SFU Clan head coach Alan Koch, Blasco was unable to get into the Burnaby school because of his English, so he ended up for a year at VIU in 2014. The plan was for the Spaniard to take English classes for a year there before transferring to SFU the following year. In that time Koch became the first coach of WFC2 and he soon brought Blasco in to be with him in Vancouver. 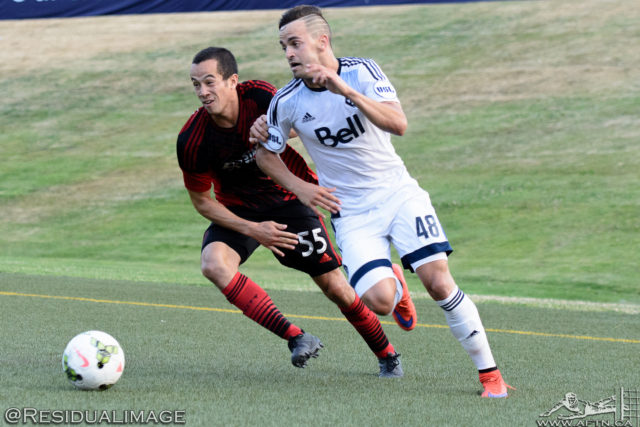 Fast forward four years and Blasco is reunited with some of those players on Pacific FC, including goalkeeper Mark Village, right back Kadin Chung, and midfielder Terran Campbell. Those are just some of the Whitecaps connections on this Pacific team, giving them a head start over some other CPL sides when it comes to chemistry and familiarity with each others play, an aspect Blasco believes will give them an early competitive advantage.

“For sure,” Blasco said. “I think the coaching staff, they really looked into who they wanted to bring in. Honestly, it doesn’t even feel like a professional team. Of course, we’re professional, but it feels like just friends. It’s a very good environment which you can tell after playing on the field because you want to play for each other. It’s really good.

“[Pacific head coach Michael Silberbauer] has played at the highest level. He knows exactly what we need. He’s not only a coach, he’s also a player. He’s been there. This team is just going to get better and better, and we’re ready for it.”

While away from the professional game Blasco played locally for the VIU Mariners in CCAA college action and for Vancouver Island side Mid-Isle Mariners in the summer PCSL.

Most recently the 24-year-old has been playing over on the mainland for CCB LFC United in the Vancouver Metro Soccer League (VMSL), alongside a couple of former WFC2 teammates in Caleb Clarke and Mitch Piraux. Watching Blasco tear up the wing for more than a few minutes it was evident that he was a player above the level he was playing at, and his ten goals and numerous unrecorded assists in his 19 appearances are a testament to that.

But with all of that came a frustration at times these past few years, when runs were made and the pass wasn’t forthcoming, or balls he played weren’t read by teammates. Sometimes he’d drift out of games, visibly unhappy with those around him. At other times, he was the most dangerous player on the pitch, with some sublime skill on display.

That consistency factor has always been something we’ve talked about with Blasco from his WFC2 days. He’s confident being back in a pro environment will help him find that again, and he doesn’t foresee any problems in trying to raise his game back to this higher level after a few seasons away in the amateur ranks. Based on Sunday’s performance, he appears right to feel that way. 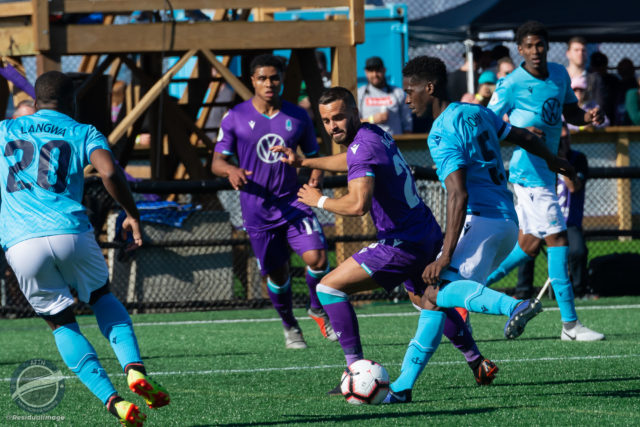 Blasco looked and felt right at home in Sunday’s opener, causing the Wanderers defence a lot of problems up the wing, especially in the first half.

Pacific are still finding their chemistry, but one exciting aspect to their attack is certainly Blasco’s pace and his excellent delivery being whipped into the box for the head of big target man Marcus Haber. A prospect the striker is relishing.

“He’s very direct and sharp when he gets into the final third,” Haber said of Blasco. “He’s got great acceleration and he can beat a man, so if he’s on his game, it’s great for a player like me to get in the box and I look forward to getting on the end of his crosses for sure.”

And Blasco is also excited by what the partnership with Haber could produce.

“He’s just a beast,” Blasco mused. “He’s played at a very high level in England, in Scotland. You got to respect that. He keeps the ball, the brings a lot of attention from the defenders. Us, as wingers, and the other attacking players, we need to take advantage of that.”

It’ll take a few games to get that combination fully clicking, and although neither registered a goal or an assist in Sunday’s 1-0 win, there were enough flashes to show what their partnership could be in time, and overall Blasco was pleased with what he saw offensively from Pacific in their first match.

“It wasn’t about their defence, it was about our movement,” Blasco said about the attacking success Pacific had against Halifax. “The way we are trying to play is very dynamic. It’s hard to play but when you get that game going, it’s hard to defend it. I think that we all played great. It was a tough game. The first game is always hard, but we accomplished our mission – three points and now on to the next one on Wednesday.”

Pacific welcome Valour FC to Westhills Stadium tonight, providing the team with an opportunity to open up an early five point lead at the top of the Spring season standings. This will be the Winnipeg side’s first outing in the CPL, a historic moment for them that will have Rob Gale’s men clearly fired up to try and take something from the game.

It’s a fact Blasco is aware of, but he feels confident Pacific will be able to build on their strong start and make it back to back wins to kick off their own season, and he’s excited by what this team could be this season.

“Our team is very brave,” Blasco believes. “The way we’re trying to play, and again it’s just the first game, is keeping the ball. Combining and getting between lines. It’s not easy but we just got to keep going and keep playing because I think it’s going to be a strong team in the league.” 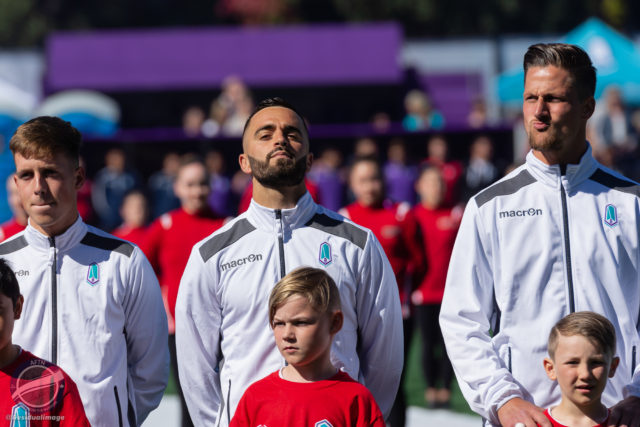 Pacific Prospects: Vancouver Island based players worth a look from Pacific FC