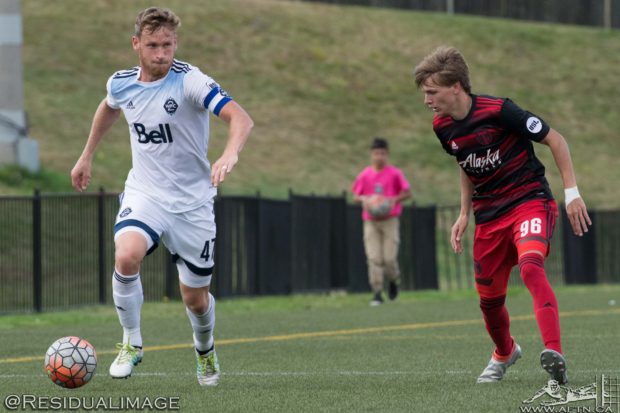 Vancouver Whitecaps 2 wrap up their USL regular season in Langley tonight with a rescheduled match against OKC Energy.

It’s a match that will have huge implications for both team’s playoff positioning, with the sides being two of three teams currently tied on 42 points. Vancouver sit in sixth spot in the Western Conference standings. OKC are seventh, with a game in hand over the Whitecaps.

A Vancouver win would see the ‘Caps move up into fourth place ahead of their bye week in this weekend’s final round of matches. That could secure them a home tie in the first round of the playoffs, but would also ensure that they can’t finish lower than sixth.

A draw or a defeat could see them end up seventh and facing a much tougher postseason route. There’s a lot on the line.

The ‘Caps were fairly pedestrian in their 2-0 loss to Timbers 2 on Sunday, and captain Kyle Greig knows they need to get some urgency back in to their game quickly if they are to hit the playoffs with some wind in their sails. Basically the postseason starts now.

“We’re disappointed dropping three points,” Greig said of the loss to the Timbers. “It’s a little bit interesting going into a game like that, knowing that we’ve made the playoffs. Something we emphasised before the game was that we don’t need to sit back on this. We need to go after this and try and get ourselves in the best position possible. Start the playoffs and try and climb the standings a little bit.

“We’re lucky to have clinched a playoff spot. We haven’t really been playing well the last ten games, so I think we really need to take advantage of the game on Wednesday and try and get some momentum going in to the playoffs.”

They certainly need to find something as the team has limped along the past few months after their excellent ten game unbeaten start to the season. WFC2 are currently winless in five and have only won on of their last ten matches.

Greig himself had an amazing start to the campaign, banging in 10 goals in his first dozen games as a Whitecaps. His season tally of 11 sees him as the seventh highest scorer in the entire league, but he’s only found the back of the net once in his last 14 outings.

The team’s form isn’t exactly going to be striking a lot of fear into possible opponents, but if they can rediscover their early season form, then that would be a different story altogether.

There’s many factors behind the ‘Caps recent dip in performances, but Greig feels that all that matters now is refinding the spark they had for the first few months of the season. If they can’t, he knows it’s not going to be an uphill battle to make an impact in the postseason.

“It’s just finding a rhythm to be honest,” Greig told us. “Guys are coming in and out of the squad these last couple of games. Guys coming down from the first team, guys picking up injuries, guys picking up yellow card accumulations, including myself.

“It’s really just trying to find a rhythm within the squad. Whoever steps on the pitch on Wednesday, and in the first playoff game, we’ve got to click or else we’re done.” 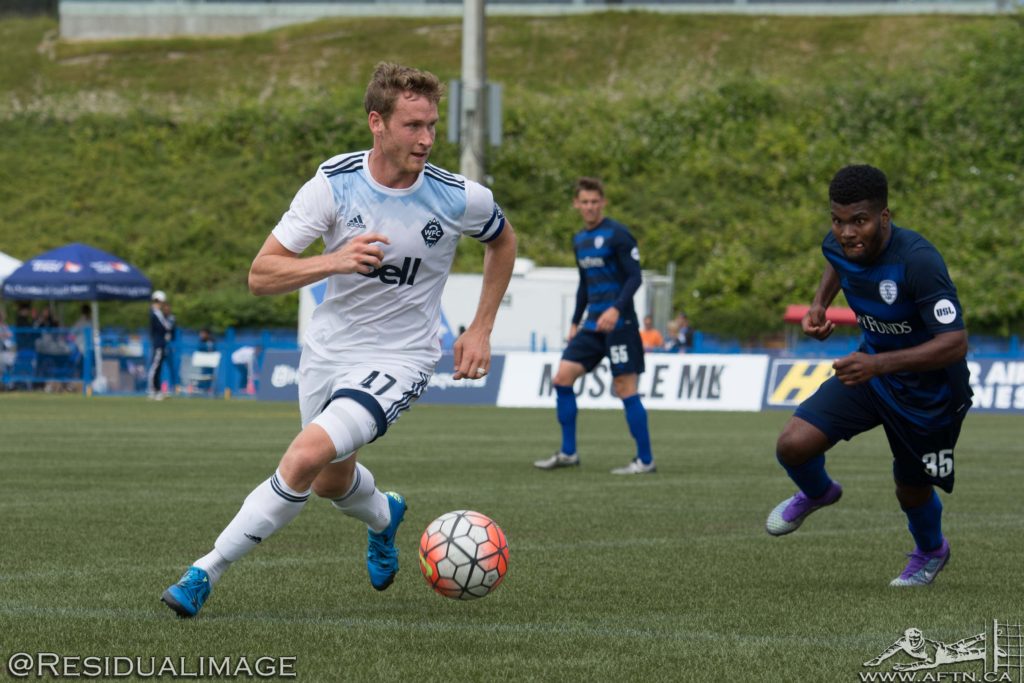 When Greig made the move to Vancouver from OKC Energy in the offseason, he was naturally aware of the make up of the squad and the constraints and challenges a MLS development team faces. But has it perhaps been a little bit tougher to adjust to than he expected?

“I don’t think so,” mused Greig. “Everybody that steps on the pitch is part of this club and there’s a certain style and a certain way that they want us to play. So I don’t think it’s been too challenging.

Greig spent two happy years with OKC Energy before making the move to the Whitecaps, giving Wednesday’s match-up some added spark for him personally. With the game being a possible precursor to what could lie ahead in the playoffs, he also feels it’s a match that should bring some added impetus to the whole WFC2 team.

“I’m really looking forward to it,” Greig admitted. “I’ve got a lot of friends on the team still and it’s a game I’m going to consider, and we should all consider, as a playoff game because it’s a team we might even see. We’re both kind of in that similar position in the standings. It’ll be a good test for us and it’ll be a fun one for me.”

Having previously tasted the playoffs with the Energy, he’s looking forward to having another bite at them this time around with the Whitecaps, and his experience will be invaluable to a young WFC2 squad.

“The thing about the playoffs in this league, in any league really, is that anybody can win the entire thing,” Greig said. “I played for Oklahoma City last year and we were the second seed in the Western Conference. LA Galaxy was the sixth seed and they ended up winning the Western Conference final and going on to lose in extra time in the final.

“It doesn’t matter what position you’re in. As long as you’re in the playoffs, anything can happen. That’s something I’ll reiterate to the guys who haven’t had a playoff experience yet.”

Greig is a Kansas boy through and through, growing up there, going to college there, and playing for PDL side Kansas City Brass.

So naturally Kansas holds a special place in his heart, and it was only fitting that Greig can now add the city to his Whitecaps memories, after coming on as a late sub for Vancouver against Sporting KC last week and grabbing the assist on Alphonso Davies’ historic winning goal.

A memorable night all round and one he won’t forget.

“It was awesome,” enthused Greig. “I wasn’t born in Kansas City but I was pretty much raised there since I was four months old. So it was a big deal for me to be able to play in front of family and friends in the stadium I’ve been to a lot.

“I’ve supported Kansas City in the past, so I think that was a big one for me, and to be able to get minutes and really contribute and make history, with qualifying for the knockout stages, was a big deal.”

That was Greig’s second Champions League appearance for the ‘Caps this season, after playing the final 16 minutes of the match against Central FC in Trinidad and Tobago.

Greig came to Vancouver with the aim of pushing for a MLS contract. Having also got some playing time in the friendly against Crystal Palace, Carl Robinson has liked what he’s seen of the big striker and is believed to be keen to include him in next season’s preseason plans.

It’s been a strong year for the 26-year-old, so has the move to Vancouver been everything he’d hoped it would be?

“I couldn’t honestly have asked for a better experience,” Greig told us. “Really being part of a club and a structure and a development side of things has been big for me. I couldn’t have asked more. It’s a really professional environment and it’s helped mould me and will helpfully push on to the next level, if not here, then somewhere else.” 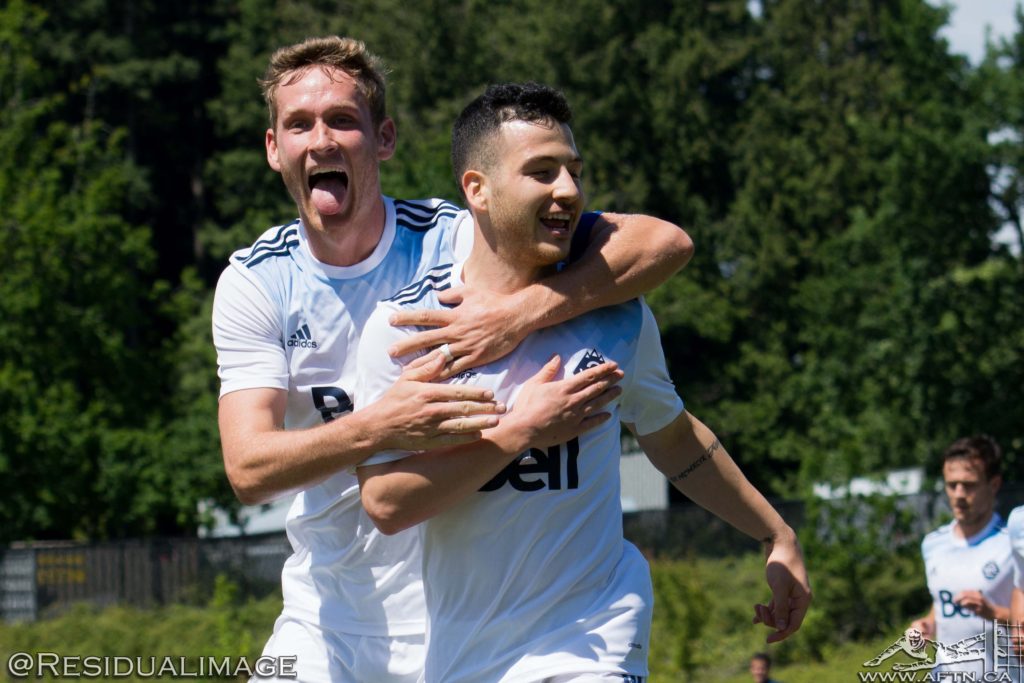 Kyle Greig’s excellent start with WFC2 catching the eye of Carl Robinson: “He will get opportunities with us”