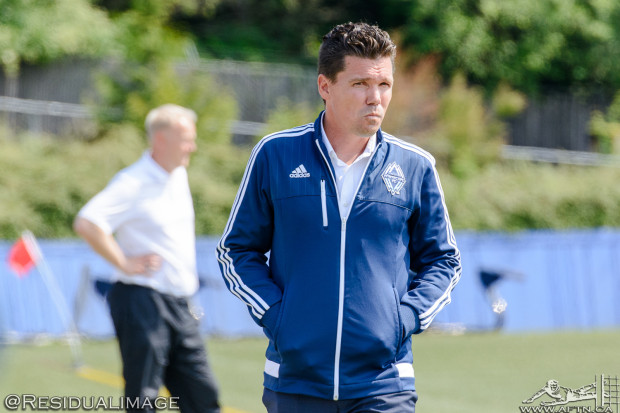 Last season’s inaugural USL season was a challenge at times for WFC2 and a steep learning curve in the early going.

In part a lot of those teething troubles stemmed from how late the group was put together prior to the campaign, with head coach Alan Koch having just over a month to get his squad assembled and ready for the 2015 season. That won’t be an issue this time around.

A rigorous offseason mini camp in November helped Koch work with his young squad, building team chemistry, working on tactics, evaluating the players he had and casting the eye over a number of trialists, some of whom made the grade and some whom didn’t.

The hard work clearly paid off with WFC2 going undefeated in their preseason matches and looking a very cohesive unit from the early going. A big difference from last year, where they struggled to find their feet and chemistry in the early matches.

The good work has been carried over to the new USL season, with WFC2 making a strong start, winning their first two matches on the road and keeping their undefeated streak going for 2016.

That’s a streak they hope to keep going when they take on Sacramento Republic in their home opener at UBC’s Thunderbird Stadium on Sunday (kick off 3pm), but everyone is keeping their feet firmly on the ground, despite the early success.

“Both [games so far] were very, very satisfying,” Koch told AFTN when we spoke with him at WFC2 training on Friday. “Having said that, we’re not getting carried away. We’ve played two games, we’ve won two games on the road, but we go one game at a time. We’re now ready for the next big challenge and Sunday against Sacramento is going to be a big challenge.

WFC2 started the new season with an impressive 1-0 win away to Orange County Blues. New captain, striker Kyle Greig, got the only goal of the game in the second half and he followed that up last week with a penalty to open the scoring in a comprehensive 3-1 win over Cascadian rivals Timbers 2 at Merlo Field. His new striking partner, Canadian international Daniel Haber, added a lovely brace to take home the three points.

Both were big wins. OC Blues were last season’s Western Conference champions and the Timbers started six MLS players in contrast to the ‘Caps starting four teenagers. Two hard fought victories against tough opposition, so which one gives Koch the most satisfaction.

“Both to be honest,” Koch told us. “The first game of any season, you never really know what you’re going to get. Even though we were happy with our preseason, most of our games were played against university teams, other professional teams that are trying to do certain things just like we were, so it’s a bit of a lottery going into that first game.

“So we’re very, very pleased to go and play a good team like Orange County on the road and get the points. So that was very satisfying. The second game, which is obviously the rivalry between ourselves, the Timbers and Sounders, it was a great game. You play against them, where they have some of the older MLS guys, and they played some of their younger players too, but it was good for our young group, primarily, to go out and get the three points.

The Whitecaps two major areas of concern last season were the lack of consistency up front (no player reached double figures in scoring), but primarily, the young ‘Caps struggled at the back, giving up 53 goals, the second highest throughout USL.

It’s early stages of course, but the WFC2 backline looks a much stronger proposition this season, with one clean sheet already to their name. Led by Dutchman Sem de Wit marshalling the middle of the defence (read our chat with him HERE), he’s looked good alongside both draft pick Cole Seiler and Residency graduate Jackson Farmer. While both full back positions have looked strong, both defensively and going forward, with Kadin Chung, Chris Serban, Jordan Haynes and Brett Levis playing there so far.

But it’s up front where WFC2 are looking particularly sharp and dangerous this season. Greig and Haber already look to be forming a formidable striking partnership, with two goals apiece from the first two matches. Their exploits perhaps highlighted even more by the goalscoring woes of the first team.

Koch has been delighted with how the pair have both complimented and contrasted each other so far, and are already looking to be a real handful for defences.

“They’re different types of attacking players,” Koch told us. “Kyle’s a big target, who can hold the ball up. His workrate is out of this world. I haven’t seen too many footballers anywhere that work as hard as he does. And Daniel’s simply a brilliant finisher. You give him a chance on his left foot, you give him a chance on his right foot, he’s probably going to score most of the time.

“They’ve actually used the word partnership and it is, they’re correct. You develop partnerships with players that play around you. They have a great partnership going right now and hopefully it can continue.”

Both Greig and Haber have spoken to us about their desire to make the jump from USL to the MLS team. That hunger, from both the strikers and everyone on the squad, can only benefit both the individual players and the team this year, and Koch agrees.

“I think so,” Koch admitted. “We’ve got a good balance right now of the young players, the young teenagers, and what we’re calling our older players, the likes of Daniel who is 23, Will Seymore and even Sem de Wit who is 21. In comparison to the other guys, they’re older, but we’ve brought in the right balance I find.

“Everybody is buying in to what we’re asking them to do right now. It’s exciting to see every player, whether it’s Alphonso [Davies] who’s 15 or Kyle who’s 26. They’re all trying to do the same thing. They all want to push on to the first team and you can tell that they’re playing for each other, which I think when you want to progress your individual career, it’s best to buy into the team focus, because then you can help each other out.

As much as we’re talking about WFC2 having a winning and successful team on the pitch this season, we do have to stay aware of the fact that results take second place to players’ development.

It’s a point Koch is keen to stress, but at the same time, the acknowledgement is there that success breeds success and players development comes on leaps and bounds when they’re playing on a winning team.

“At the same time we have to be cognisant of finding the balance between development and performance,” Koch added. “Don’t get me wrong, I want to win and every player that plays wants to win, but when you go to Portland and you throw out four teenagers in your starting eleven, things will happen. Some are positive and some will be negative.

“We’ll ride the ups and downs of individual games, but we do have a lot of belief in the players we have in the group. I believe in every single one of those guys and that they have the ability to push on. We’ll continue to give all of them chances and the ones that take them, they’re going to develop but they’re going to help us win some games too.”

Whitecaps fans get their first chance to see the exciting new-look WFC2 in person on Sunday. A near capacity crowd is hopefully to be expected on Sunday, but as we’ve discussed several times before, despite the plethora of exciting young talent that could be future stars on the MLS team, WFC2 has proved something of a hard sell, averaging just 1,682 fans last season.

A lot of that is down to the location up at UBC, but I’m still not convinced that the desire is there amongst the Whitecaps fanbase to come out and support a developmental team in huge numbers.

This may change if the team is more successful this year and in the running for the playoffs and maybe even a championship. So if Koch had a message for ‘Caps fans as to why they should invest and come out and see WFC2, what would it be?

“I think the best thing that our group offers is that literally everybody that came to our games last years left, and I had lots and lots of comments from people directly to me, that they found the brand of football that we were playing was highly, highly entertaining,” Koch said. “The young guys were coming out and you could tell that they were giving everything they have to try to push on and make the first team.

“So you’re going to come out and watch an exciting brand of football. A bunch of guys that are giving everything they can to progress and the level of football in the USL gets better and better all the time. It’s no surprise that a lot of players in the USL are pushing on and going to play for MLS teams. We’re trying to do that and every other team is trying to do that too.

“It’s a good, exciting product. Obviously you’ve got to get people there first so they can actually see what it’s like. Hopefully with the first game, we’ll get a good crowd and hopefully a good performance and a positive result too.”