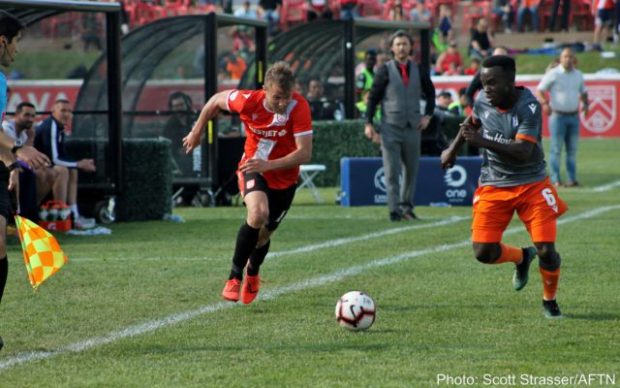 Success in soccer is, like every team sport, down to committee. A team can’t succeed unless there’s buy-in from every player. That’s something that head coach and general manager Tommy Wheeldon Jr. preached multiple times in post-game press conferences.

Cavalry FC is no different, and it was a combination of good coaching, team depth, and player attitude that propelled the club to an 11-2-1 overall record, a first-place finish in the Canadian Premier League spring season, and a third-round clash with Vancouver Whitecaps in the 2019 Canadian Championship.

But strong team performances aside, that doesn’t mean there weren’t standout individuals. Here are five players who, in my view, excelled for Cavalry throughout the 10-game spring season, as well as the first two rounds of the Canadian Championship.

Cavalry’s earliest wins largely came down to the team’s strength from set pieces, and Büscher’s dead-ball abilities played a big part in that success. He took many of the team’s corner kicks and indirect free kicks throughout the spring season, and his vision and placement resulted in a couple of goals in key moments for the Cavs. Though he didn’t record any direct assists in the league, at least two or three of Cavalry’s goals in the CPL originated from a ball played into the box by Büscher.

He also nabbed two goals himself – one against Pacific in the second leg of the Canadian Championship and a cleverly-taken free kick against York9 in the game that clinched the spring season for the Cavs.

Apart from his ability to set up the attack, Büscher was a source of calm and confidence for Cavalry in the midfield. The German was a focal point for the team when it opted for a possession-based style, and he showed a comfort in exchanging passes with his midfield partners, be it Elijah Adekugbe, Nik Ledgerwood, or whoever else lined up for Cavalry in the middle of the park. 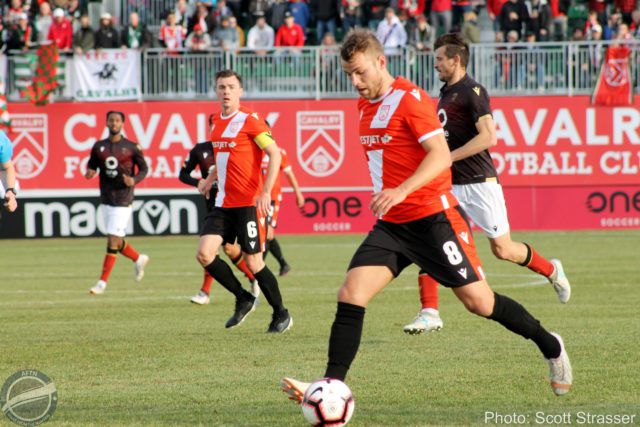 Julian Büscher’s strength from dead balls was a boon for Cavalry during the spring season.

For casual observers, Adekugbe might fly under the radar, but if you watch closely, you can see how important he is to Cavalry both offensively and defensively. He plays with the typical authority you hope your centre midfielders possess, and has formed a solid partnership in midfield with the likes of Büscher, Ledgerwood and Sergio Camargo.

Along with being one of the best players in the league at simply calming the play down and keeping possession, Adekugbe had a keen eye for setting up plays, as evidenced by his three assists in the CPL during the spring season.

He was also willing to put in a tackle. Though he was booked three times, at least two of those were professional fouls that snuffed out potential counter-attacks from Cavalry’s opponents.

Despite being just 22, Adekugbe was made one of Cavalry’s assistant captains for the inaugural season, which speaks to the trust that Wheeldon Jr. has in him. 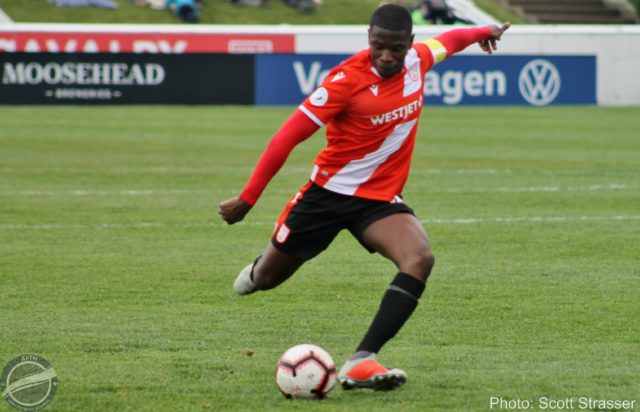 Elijah Adekugbe led the CPL in assists during the spring season, with three.

It’s perhaps telling that in the one game Zator didn’t play for Cavalry in the CPL, the team conceded three goals. Simply put, the University of Calgary alum and former Vancouver Whitecaps 2 player was a rock for Cavalry’s back line.

Whether he lined up in a back three or four, Zator hardly let anything past him during the spring season. He was a solid tackler – as evidenced by a lack of yellow cards shown to him this season – and almost never lost a header.

Zator – whom Foot Soldiers have cringingly started to refer to as “Big-Dick Dominick” ¬¬– also showed he was a viable offensive threat throughout the spring season. He was comfortable in possession, and often acted as a soccer-version of a quarterback when Cavalry opted to play more direct. More often than not, he was the player who would ping a 40-yard ball out to the touchline for wingers to collect.

Higher up the pitch, he was a danger as well. He frequently went into opponents’ 18-yard boxes for indirect free kicks and corners, and his aerial ability garnered two goals for the Cavs. He scored the late winner in the inaugural match against York9, and scored another header in the first leg of the Canadian Championship against Pacific FC.

A game that particularly illustrated Zator’s importance to Cavalry’s back line was the 3-0 away victory over FC Edmonton. While Tommy Wheeldon Jr. initially opted to rest him in that fixture, Cavalry’s poor start to the game resulted in Zator being brought onto the pitch after 35 minutes. The team’s play improved immensely after he was subbed on. 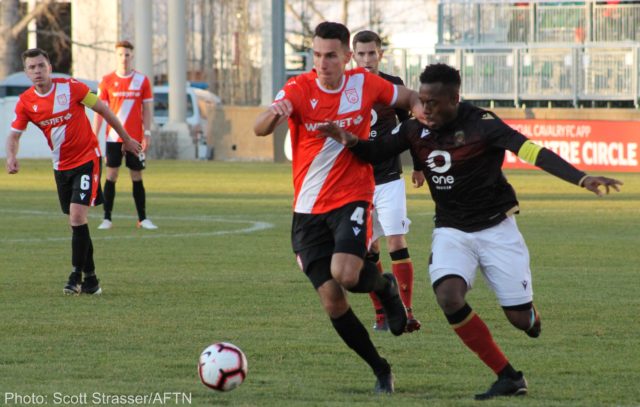 Dominick Zator proved important to Cavalry both defensively and offensively during the spring season.

Like Zator, Carducci’s absence when he wasn’t on the pitch was noticeable for Cavalry this spring season. That’s not to say backup ‘keeper Niko Giantsopoulos didn’t perform well when called upon, but you can’t deny that Carducci was absolutely solid for Cavalry in his nine games in the CPL. In my view, the former Vancouver Whitecaps player was the top goalkeeper in the league throughout the spring season.

His statistics back up that claim; Carducci’s five clean sheets in the CPL were a league-high, and he only allowed four goals in 810 minutes of league action. He made 23 saves, which is the third-highest total in the league, behind York9’s Nathan Ingham and FC Edmonton’s Connor James (who both faced more shots).

Carducci’s shot-stopping abilities were on display multiple times this spring season, and there were a few tight fixtures where his heroics arguably rescued a result for Cavalry. Performances that come to mind include the second half of the 1-0 home win over FC Edmonton, when he made two saves against Marcus Velado-Tsegaye, and the 1-0 win over Valour FC, when he had to twice deny former Foothills FC teammate Ali Musse.

The “Roman Wall” (as his teammates refer to him) also came up with one of the best saves of the spring season in the second half of the 3-0 win over FC Edmonton, when he flew across his line to save a long-distance strike that was destined for the top corner. 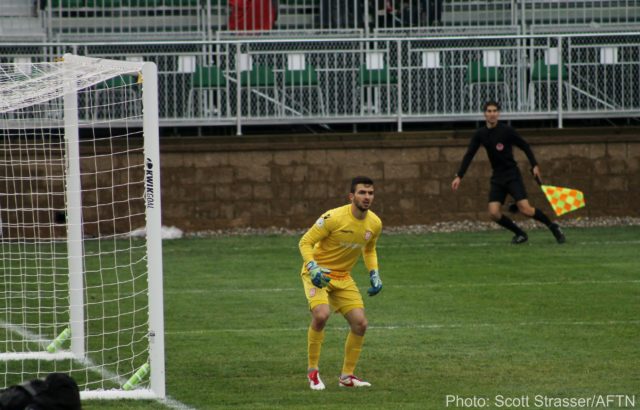 Marco Carducci recorded five clean sheets in nine games and only let in four goals. He also made 23 saves – the third-highest in the league.

It didn’t take long for Pasquotti to become a fan-favourite at Spruce Meadows. His energy and tenacity on the right wing earned plenty of plaudits from Cavalry FC’s supporters, as well as the admiration of fans of other CPL clubs.

Simply put, the Lethbridge native hounded full backs throughout the spring season. He never stopped running and, though not the silkiest dribbler, showed repeatedly he had a knack for getting behind his defenders and whipping in a cross.

His play garnered comparisons with Forge winger Tristan Borges, and many fans online commented that the two have been the most exciting wide players in the CPL this season.

Pasquotti was also a weapon, of course, with his long throw-ins – just ask Pacific FC, who struggled to contend with his darts from the touchlines during the first leg of their Canadian Championship tie with the Cavs. That was also Pasquotti’s first start in a Cavs shirt, after two strong performances coming off the bench, and he marked it with a two-assist performance. He’s been in the starting 11 ever since.

Statistically, his offensive output was impressive throughout the spring season, with two goals and four assists across 12 games. He had a particular aptitude for showing up in games against Cavalry’s closest rivals – Forge FC. He scored the winning goal late in stoppage time against Forge when the two teams first played each other, and he fed in the lay-off that Sergio Camargo scored from in the second leg of their Canadian Championship tie with the Hamilton-based side.

Of course, Calgary soccer fans that followed Foothills FC in the last few summers were already well aware of Pasquotti’s talents and never-lose attitude. Pasquotti wrote Calgary soccer history when he scored the winning goal for Foothills in the 2018 PDL championship final. Now, fans across the rest of the country are beginning to see why Wheeldon Jr. was so keen to have him in his ranks. 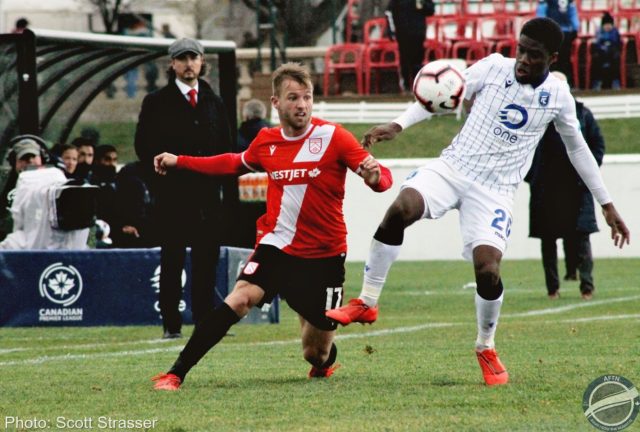 Pasquotti’s tenacity on the right wing quickly made him a fan-favourite among Cavalry supporters.