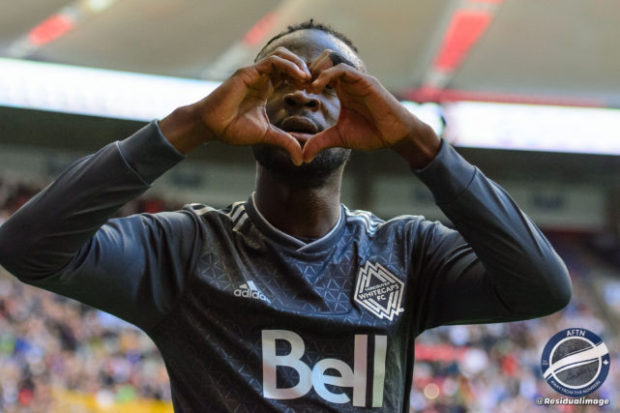 We’ve had our Vancouver Whitecaps of the Decade XI for the 2010s, our All-Canadian and All-American Whitecaps MLS XIs. Now it’s time for our XI of the best short-term Whitecaps from the MLS era so far.

Over the course of their nine (and shortened 10) MLS seasons, Vancouver Whitecaps have had their fair share of players that were only in the city for a short time, some will be remembered for the right reasons, and some for the wrong ones.

The ‘short term’ criteria is based on players who played on the ‘Caps for a season or less. Here’s hoping this brings up some nostalgic memories.

We’ve gone with a 4-3-3 formation for this team. Let us know if there is anyone we missed or you felt deserved to be on the list, and enjoy the read while we wait for the return of the MLS season and wonder who from the current crop might make this team in the future! 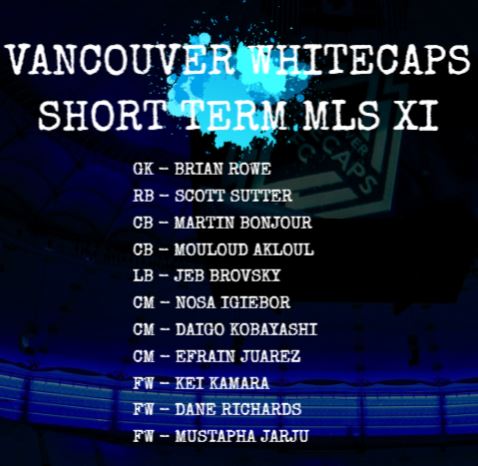 GOALKEEPER – BRIAN ROWE: Vancouver has had some stability in goal throughout the years, so finding a player for this category was challenging, but we settled on Brian Rowe. Rowe was acquired from the LA Galaxy in December of 2017, after spending six seasons in the city of stars. Brought in to provide stability between the pipes in Vancouver, Rowe and Stefan Marinovic shared the net during the 2018 MLS Season, primarily due to an injury to the Kiwi.

Rowe made 10 appearances in goal, all consecutively, winning three times while allowing 22 goals. His most memorable involvement was in the summer of 2018, a 5-2 bashing of his current club, Orlando City. His contract was not picked up at the end of the 2018 season, and he signed with Orlando ahead of the 2019 MLS season.

RIGHT BACK – SCOTT SUTTER: Sutter came to Vancouver in 2019 on the back of two solid seasons at Orlando City, and was brought in to provide depth behind Jake Nerwinski. The Englishman started the third game of the season in Houston, and two of the next four, then was used sparingly throughout the rest of the season. Although he was not starting every game, Sutter provided a spark off the bench, appearing in 19 games but only starting six. He scored a goal on the road in New York, in the middle of a gruelling road trip in May of last year.


Despite looking good in his limited time on the pitch, Sutter had his option declined at the end of the season and has yet to find a new home. One of his accomplishments with the Whitecaps was for his off field work, winning the 2019 Humanitarian Of The Year.

CENTRE BACKS – MARTIN BONJOUR AND MOULOUD AKLOUL: Martin Bonjour was signed from Rampla Juniors in January of 2012, making his debut two months later against MLS debutants Montreal Impact in a 2-0 Whitecaps win. The Argentine would appear in 28 games that season, scoring a goal and collecting an assist, forming a steady bond with Jay DeMerit in the heart of defence. Bonjour was waived at the beginning of 2013, after Andy O’Brien arrived and became the starter in the middle of the defence.

Mouloud Akloul was signed to a MLS deal on March 30th, 2011, making seven starts and eight overall appearances, after being with the Whitecaps when they were still in USSF but injuring himself on his debut that previous season. Aside from taunting Portland players with an imaginary chainsaw after a 2010 playoff win, the Frenchman will be most remembered for his extra time, aggregate winning goal versus Montreal in the Canadian Championship.

Following an Alain Rochat free kick, Akloul stabbed the ball home from close range, sending the Whitecaps to the final against Toronto FC. But then Akloul was waived midway through the season, with the ‘Caps being the last professional club he has appeared for.

LEFT BACK – JEB BROVSKY: Brovsky signed his first professional MLS contract with Vancouver on March 14th, 2011 after being drafted 19th overall in the MLS SuperDraft that same year. He went on to play 24 times that season, collecting one assist. Brovsky did not have a massive contribution, but rather a notable one off of it, receiving the Whitecaps Humanitarian Of The Year award, following some great work overseas in India, conducting soccer camps for two weeks.

Brovsky was selected by Montreal in the 2011 expansion draft, and has had stints with both Minnesota United, Montreal, and NYCFC, and even in Norway, since his time in Vancouver.

CENTRAL MIDFIELD – NOSA IGIEBOR The Nigerian was signed in September of 2017, with options for 2018 and 2019, following a career all over Europe, and 15 games with his national team. He only appeared in one regular season MLS game, a 2-1 loss at Portland. Despite that, he started in both playoff games versus Seattle, a 2-0 aggregate loss. He looked solid beside Aly Ghazal in midfield, but his option was declined at the end of the season, and he signed with Anorthosis Famagusta FC in the Cypriot First Division. There was no word on what class of travel he flew there by.

CENTRAL MIDFIELD – DAIGO KOBAYASHI Signed as a free agent at the beginning of the 2013, the skilled Japanese midfielder appeared in 30 games that season, scoring two goals and assisting on four others. His most memorable moment was a thunderbolt from distance against the Columbus Crew in the second game of the season for Vancouver. His option was declined at the end of the season, and he went on to play four more MLS Seasons with New England Revolution. He has most recently played with Las Vegas and Birmingham of the USL.

CENTRAL MIDFIELD – EFRAIN JUAREZ Juarez was initially heralded as a good signing for Vancouver in January of 2018, following a club career in Europe and Mexico, and appearances with the Mexican National team. Juarez struggled mightily early on, appearing in 16 games where collected two assists. Unfortunately, he was also shown four yellow cards and two red cards in a dismal Whitecaps season, one of which came after manhandling a referee. He mutually agreed to terminate his contract in early 2019, and signed with Valerenga in Norway. After seeing time in 19 games, he retired and is now an assistant at NYCFC in MLS.

FORWARD – KEI KAMARA One of the greatest scorers in MLS history, Kei Kamara was picked up by the Whitecaps from New England for a couple of SuperDraft picks in December of 2017, following lots of speculation. Having previously been named an MLS All Star, MLS Humanitarian Of The Year, MVP Finalist, and in a MLS Best XI, he came to Vancouver with plenty of hype surrounding him.

He started off his ‘Caps career with three goals in his first five appearances, collecting 14 goals across 28 games in the 2018 season overall. Despite scoring plenty and assisting on six goals, Kamara’s contract was up and not renewed. He has since signed with Colorado, averaging a goal every two games with 15 goals in 30 appearances over the 2019 season and early 2020.

FORWARD – DANE RICHARDS The Jamaican came to Vancouver in a trade for another short term Whitecap who just missed out on this team, Sebastian Le Toux, providing a spark right away and scoring twice in his first five appearances with the ‘Caps, including a cracker against Real Salt Lake in his fifth game.

Richards had speed and an ability to drive at defenders. English side Burnley liked what they saw out of him and signed him to a pre-contract in August of 2012. His contract ran out in Vancouver so he headed overseas in the winter of 2012, making one appearance with Burnley, before going on loan to Norweigan club Bodo/Glimt and eventually signing with them permanently. Richards returned to New York in 2015, then making his way to the USL with Indy Eleven and Miami FC before retiring from after his stint in Florida.

FORWARD – MUSTAPHA JARJU We all knew he would be on here somewhere, didn’t we? The Gambian was signed as the Whitecaps second ever Designated Player in the summer of 2011 and the first player from the continent of Africa to sign as an MLS DP, joining the club from Belgian side RAEC de Mons.

Initially hailed as a goal scorer, Jarju played in 10 matches (five starts), registering 14 shots and not being able to score. In what was a frustrating signing for the club and fans alike, Jarju had his contract terminated in January of 2012, a mere six months after putting pen to paper with the club.

His standout highlight? Well it has to be the only goal he did score in a Whitecaps shirt, albeit in a reserve match down in Portland. Still a cracker though and we were there to see it.

HONOURABLE MENTION – FABIAN ESPINDOLA An honourable mention because he never actually appeared for the club, Espindola was acquired to bolster the team scoring in July of 2016, having been a reliable MLS goal scorer through his career at the time with RSL, DC United, and the Red Bulls.

Espindola was picked up for allocation money, but never reported to Vancouver and was sold to Club Necaxa six days later. The Argentine went to Spain after a short spell with the Mexicans, appearing last for San Martin de Tucuman in his native country in 2018.